University of Pikeville at Cumberland University | February 10, 2018
BoxscorePlay-by-Play1st Half2nd Half 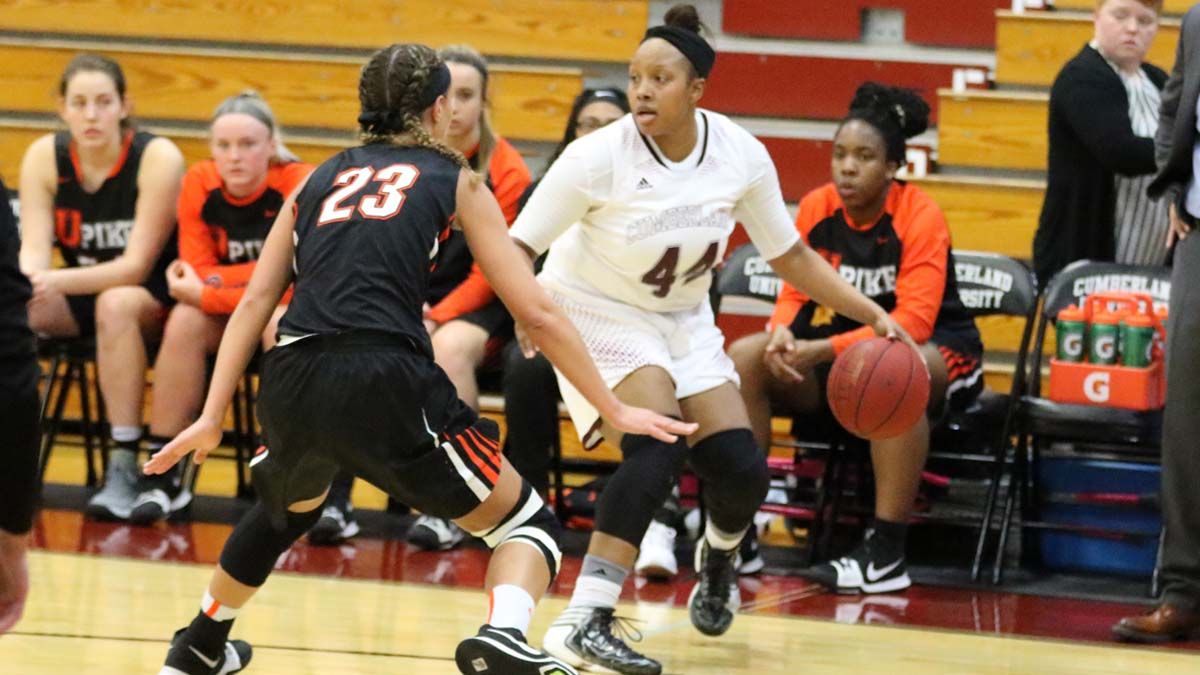 LEBANON, Tenn. – Kyra Tucker netted 15 points and Ant’Treasia Patton added 10 points and eight rebounds, as Cumberland used an 18-5 run in the third quarter to pull away for a 59-37 victory over the University of Pikeville in women’s basketball action here Saturday at the Dallas Floyd Recreation Center.

The Phoenix (16-9, 5-5 Mid-South) ended a three-game losing streak, holding the Bears to a season-low 37 points (previous low was 50 this season), holding Pikeville to 29 percent shooting, including 5-of-19 from 3-point range.

Cumberland led 28-18 at the half but UPike’s Aundrea Matchen netted a 3-point to start the third period. The Phoenix put together an 18-5 run until the final seconds of the quarter, breaking open what was a one-point Bears lead midway through the second period.

Patton made two free throws before a 15-footer by Kaitlin Oliver and then consecutive baskets by Patton. After two free throws from Cydney Goodrum, Micah Norris added a 3-pointer and another field goal before Carli Codner-Pinto’s triple from the top of the key put the Phoenix ahead, 43-26.

Matchen’s layup to start the final period pulled the Bears within 43-31, but Cumberland answered with a 10-2 spurt over the next four minutes. Tucker started the run with her third triple of the game and she and Oliver added baskets. Codner-Pinto’s field goal at the 4:14 mark increased the advantage to 53-33.

Matchen was the only Pikeville player in double figures with 15 points and Jamie Castle added eight.

Tucker had a nice up-and-under for a layup and then made a 3-pointer in the first minute of the contest and Oliver’s one free throw gave CU a 6-2 lead early in the contest. Patton added a midrange jumper and Norris hit a 3-pointer from the top of the key for an 11-7 Phoenix advantage midway through the period.

The teams combined for just two points the rest of the quarter, with Pikeville missing eight shots and committing a pair of turnovers. Patton’s layup at the 4:01 mark was the last points for CU, which missed its last six shots as well as two free throws, but the home team took a 13-7 edge at the end of 10 minutes.

Matchen connected on two foul shots and Emily Baker’s layup in the first 45 seconds of the second period ended the drought for the Bears. Adison Corder nailed a 3-pointer from the left wing and Matchen added a long two-pointer, finishing a 9-0 run for Pikeville.

Kerrice Watson’s steal and layup tied the game at 16 before a jumper by Tucker and another layup for Watson put Cumberland ahead, 20-18. Oliver’s layup extended the lead to four and Tucker drilled a triple from the top of the key just before the halftime buzzer for a 25-18 advantage at intermission.

Pikeville did not score for the final 5:29 of the period, missing five shots with four turnovers during the stretch. Tucker led all scorers with 10 points in the half, though Cumberland shot just 36 percent (10-for-28), missing numerous layups. The Bears were even worse at 29 percent (7-of-24). Matchen netted seven of the team’s 18 points in the half.

Cumberland begins a three-game road swing next Thursday at Life University and plays at the University of the Cumberlands on February 17 and Campbellsville University on Feb. 22 before ending the regular season at home against Georgetown College on Feb. 24.