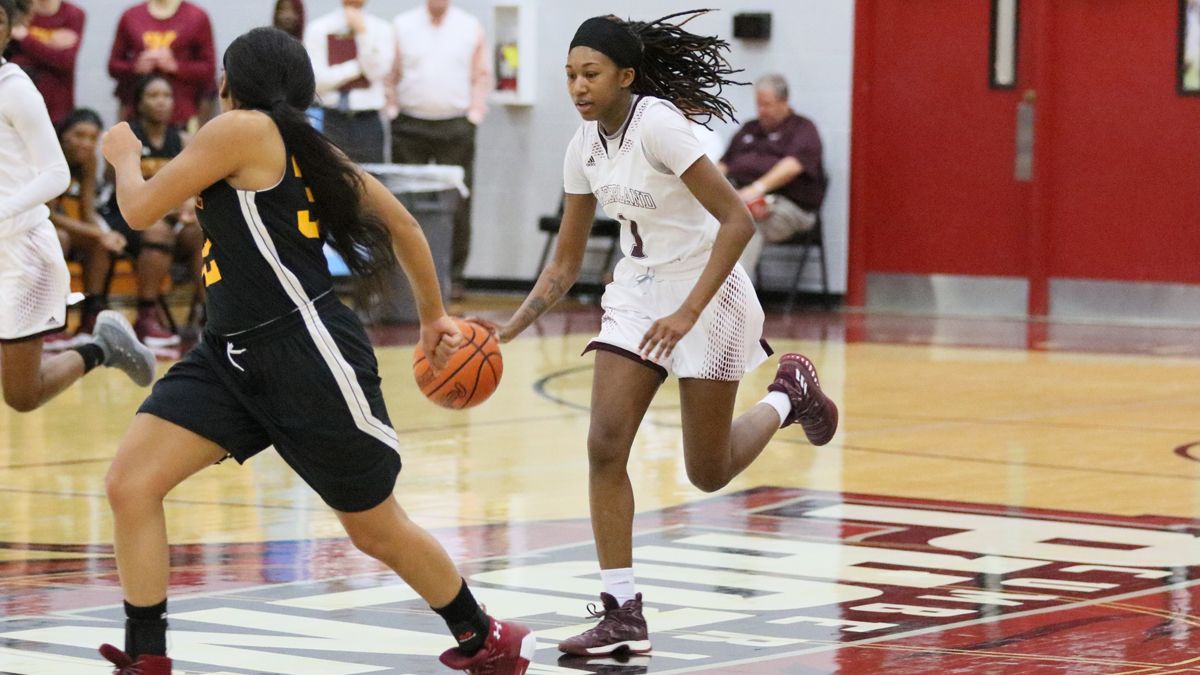 Micah Norris posted 11 of her 17 points in the fourth quarter and added eight rebounds and three steals in CU's 51-46 win Saturday at the Cumberlands. (Credit Steve Wampler)
Cumberland (Tenn.) at Cumberlands (Ky.) | 0,

WILLIAMSBURG, Ky. – Micah Norris netted 11 of her 17 points in the final 10 minutes and Cumberland put together a 24-0 run in the fourth quarter, holding the University of the Cumberlands scoreless in the period, to overcome a 19-point deficit in a 51-46 comeback victory in women’s basketball action here Saturday at the O. Wayne Rollins Center.

The Phoenix hit 8-of-12 shots in the final period after shooting just 24 percent (10-for-41) in the first three quarters. Cumberland also forced 11 turnovers, turning those into 12 points.

Norris was the main catalyst offensively, hitting a pair of 3-pointers, the second one bouncing straight up-and-in, pulling the Phoenix within 46-39 with 4:24 remaining. Carli Codner-Pinto added an old-fashioned 3-point play during the first five minutes of the quarter as well for CU.

Ant’Treasia Patton made a baseline 17-footer the next time down for the Phoenix and Norris converted a layup off her steal, making it 46-43 with 3:03 remaining. Cumberland kept up the pressure, in the half-court to start the period but full court for the last six or so minutes, keeping the Patriots from running any offense.

Patton’s steal near midcourt led to another basket for CU, this one a driving layup from Kaitlin Oliver, cutting the deficit to one with 2:20 on the clock. Kyra Tucker’s layup at the 1:39 mark gave Cumberland its first lead of the contest.

The Patriots committed another turnover with just under a minute to play, this one in the backcourt, leading to a layup from Patton, and after a missed shot by the Cumberlands, Patton and Oliver each connected on 1-of-2 foul shots in the last 17 seconds to seal the win.

Cumberland started the game 1-for-10 from the field, falling behind 11-3 thanks to five quick points from Bruner as well as two field goals by Cheyenne Madden. Codner-Pinto’s 3-pointer and a layup by Oliver on an assist from Codner-Pinto got the Phoenix into a bit of an offensive rhythm and Patton’s layup on the fast break cut the deficit to 12-10 at the end of one quarter.

Norris made a pair of layups for Cumberland to start the second period, the second one knotting the game at 14, but the Phoenix missed its last eight shots and committed four turnovers over the final seven minutes of the quarter.

Simpson’s 3-pointer from the right corner put the Patriots ahead and only two free throws by CU’s Cydney Goodrum were posted over the next three-plus minutes. Ashley Jackson’s triple from the left wing and baskets underneath by Madden and Rhodes put the home team ahead, 24-16.

Bruner and Jackson netted 3-pointers in the final minute of the half for the Patriots, who took a 30-16 advantage to the locker room. Bruner led all scorers with 10 points and Madden added six while Rhodes collected five points and nine rebounds for UC. Cumberland shot just 6-of-27 from the field, missing from all areas, including several layups.

The third quarter did not go much better for the Phoenix, with Simpson nailing a 3-pointer to start the period and Bruner adding a jumper to increase the UC advantage to 35-18. Baskets by Oliver, Patton and Norris cut the deficit to 35-24 midway through the period, but the Patriots answered with field goals by Rhodes and Brandi Williams.

Goodrum connected on two foul shots at the 2:13 mark of the quarter, but those were the last points for CU. Bruner made her third 3-pointer of the game and Rhodes added two free throws in the final minute, setting up the comeback by the Phoenix.

Cumberland plays at third-ranked Campbellsville University on Thursday before ending the regular season next Saturday at home versus Georgetown College.