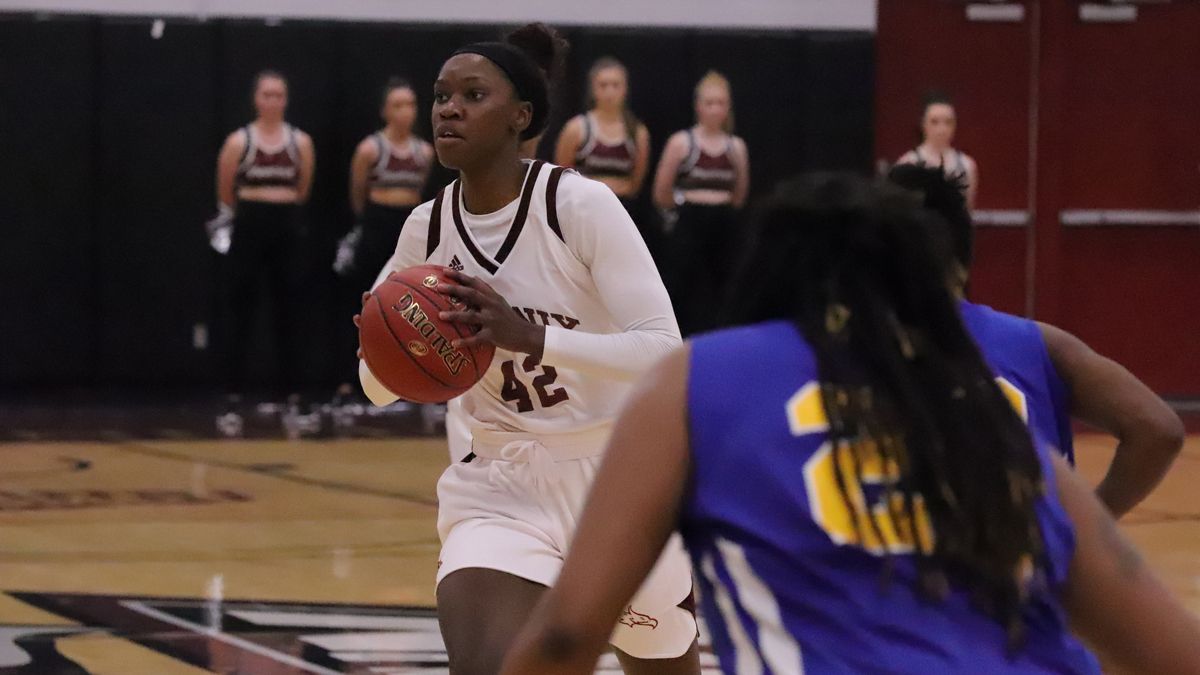 MCKENZIE, Tenn. – Dominique St. Louis scored 13 points, Devon Burns netted 12 and Cumberland held an eight-point lead after one quarter but could not hold on down the stretch, as 21st-ranked Bethel University used a 14-0 run in the final period to post a 69-60 win in women’s basketball action here Saturday night at Crisp Arena.

The Phoenix (1-2) lost both games in the Mid-South Conference/Southern States Challenge, dropping a 78-71 decision to Martin Methodist on Friday.

Cumberland ended the opening period with a 12-4 run to take an eight-point advantage and maintained the lead until the 6:42 mark of the fourth quarter. St. Louis and Burns each posted seven points in the first half and Katherine Griffith and St. Louis each scored four points in the third quarter for a 46-42 edge after 30 minutes.

Two free throws by Morgan Martin and a putback from Tyasia Williams knotted the game at 46 in the final period, but Kerrice Watson nailed a 3-pointer for the Phoenix on the other end. Griffith added two free throws for CU, but the Wildcats (5-1) then scored the next 14 points, including four straight 3-pointers, three of those from Myah Taylor.

Ashton Hulme’s layup pushed the Bethel lead 60-51 with 3:37 remaining. Burns answered with a triple for Cumberland and a field goal by St. Louis and two foul shots from De’Naizha Elder cut the deficit to 62-58, but that was as close as CU would get.

Bethel got three offensive rebounds and worked almost 90 seconds off the clock before Millie Bryant nailed a dagger, a 3-pointer from the wing, all but ending the game. The Wildcats outrebounded the Phoenix, 41-26, collecting 14 second-chance points.

Griffith finished with 10 points off the bench for CU and St. Louis grabbed six boards.

Martin picked up the Wildcats with Taylor on the bench because of foul trouble, netting 18 points with 12 rebounds. Willis added 11 points and 13 boards off the bench and Taylor collected 21 points, including 5-for-8 from behind the arc.

Elder’s 3-pointer and baskets by Burns and St. Louis tied at the game at 11 to start the contest. Taylor netted 10 of her team’s first 11 points before she picked up a technical foul and then her third foul late in the first period.

The Phoenix finished the opening quarter with a 12-4 spurt, which started with a 3-pointer by St. Louis. Griffith had back-to-back buckets and Burns ended the period with a triple and a short jumper for a 23-15 CU advantage after 10 minutes.v

Briana Vandlen’s 3-pointer and a basket underneath by St. Louis gave Cumberland a 30-19 lead with 6:02 left in the second quarter, but the visitors missed their last seven shots and committed a pair of turnovers for the remainder of the half.

Willis’ putback ended a five-minute scoring drought for the Wildcats, who made 5-of-6 foul shots in the final 2:24 of the period, cutting the CU lead to 30-26. Vandlen hit two free throws for the Phoenix with 4.2 seconds left in the quarter for a 32-26 CU advantage at intermission.

Bryant started the third quarter with a layup and a 3-pointer after shooting two air balls in the first half, but Cumberland scored six straight points to maintain the lead. St. Louis and Elder made field goals and Burns connected on two foul shots for a 38-31 advantage.

Carli Codner-Pinto’s runner and a putback from St. Louis pushed the lead to nine, but Martin netted seven straight points and Hulme added a layup, making it a four-point game headed to the fourth quarter.

Cumberland plays an exhibition at Lee University on Wednesday and heads to the College of the Ozarks in Missouri for two games next weekend.