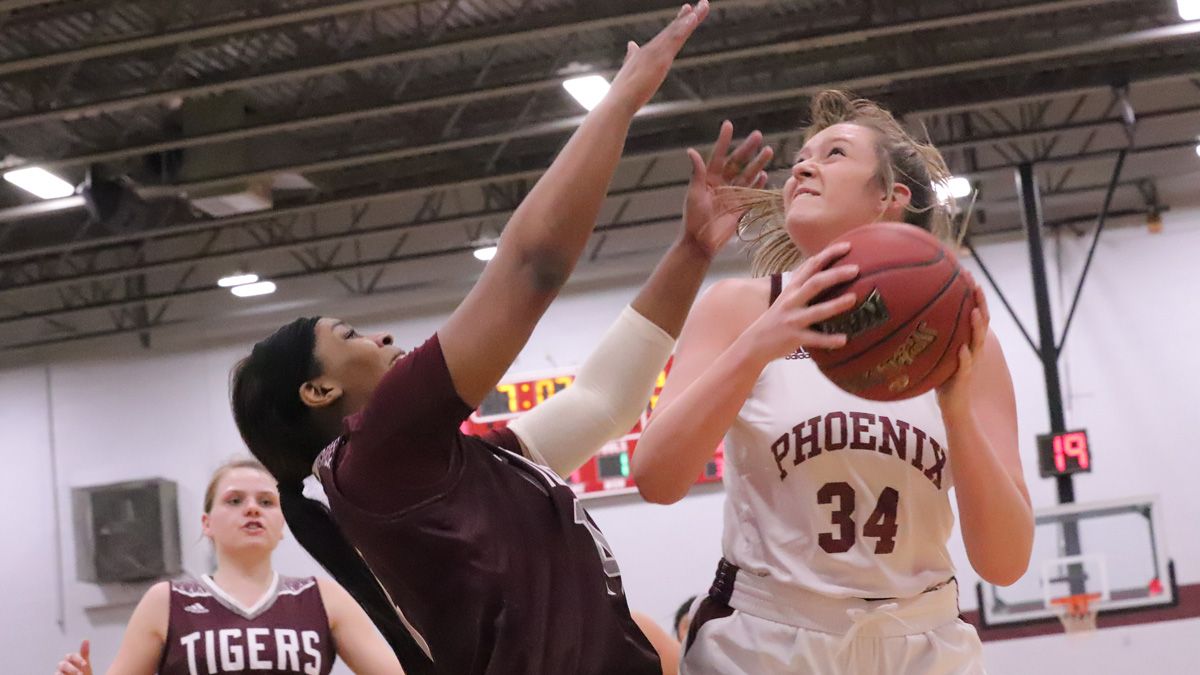 The Tigers (22-2, 8-0 Mid-South) outscored Cumberland, 34-18, in the second half, with Gregory hitting five of her six triples in the final two quarters, overcoming poor shooting by the rest of the club. Gregory made 9-of-16 from the field while the rest of the Campbellsville players connected on just 14-of-66 shots.

Cumberland tied the game at 18 in the second quarter before going scoreless for almost four minutes. Campbellsville netted 15 of the final 21 points in the half for a 33-24 advantage at the break.

The Phoenix (6-13, 2-5) made only 7-of-27 shots and committed 13 turnovers in the second half, constantly finding themselves in trap situations against the Campbellsville defense. Gregory hit a pair of 3-pointers in the third period to stretch the lead to 41-27 and Briana Vandlen’s basket at the 2:06 mark ended a seven-minute drought for Cumberland.

Another trifecta for Gregory and a layup by Madison Stewart ended the period with the Tigers ahead, 46-31. Gregory started the fourth period with a 3-pointer and added another midway through the quarter.

Griffith was one of the lone bright spots for Cumberland, hitting 7-of-13 shots and 5-for-8 at the foul line, setting a new career-best for the second straight game. The junior has now scored in double figures in seven of the last eight games. Vandlen finished with eight points and Britany Miller collected six points and 10 rebounds for CU.

Madison Faulkner was the only other Campbellsville player in double-digits with 11 points and eight boards.

The Tigers netted the first six points of the game before a short jumper from Jemilah Leonard got the Phoenix on the board and Griffith converted an old-fashioned 3-point play as well as a baseline jumper, cutting the Campbellsville edge to 9-7.

Miller’s layup and a runner off the glass by Vandlen put Cumberland in front, 12-11, but a 3-pointer from Lexy Lake, the only one of the quarter for the Tigers, and a layup in the final seconds from Gregory gave Campbellsville the lead, 16-14, at the end of one period.

Baskets by Vandlen and Dominique St. Louis tied the contest at 18 just over two minutes into the second quarter but two Alexus Calhoun free throws put the Tigers back ahead. Neither team scored for more than two minutes and Campbellsville ended the half with a 13-6 spurt.

Gregory and Madison Kaiser made 3-pointers and Madison Faulkner and Stewart added field goals before a jumper from Sammy Rogers ended the run for the Tigers. Griffith’s layup at the 4:05 mark ended an almost four-minute drought for the Phoenix, but CU made just 3-for-11 shots over the last seven minutes of the quarter.

Kerrice Watson’s layup with just under two minutes to play cut the Campbellsville advantage to 33-24 at intermission. Gregory led the Tigers with 10 points and Griffith connected on 4-of-6 shots and 3-for-6 at the foul line to lead all scorers with 11 points.

Campbellsville netted 11 points of 13 Cumberland turnovers in the half, overcoming 12-for-42 shooting overall, 3-of-14 from 3-point range.

Cumberland hosts Georgetown College this Saturday at 2 p.m. for the club’s only two-game homestanding conference play.