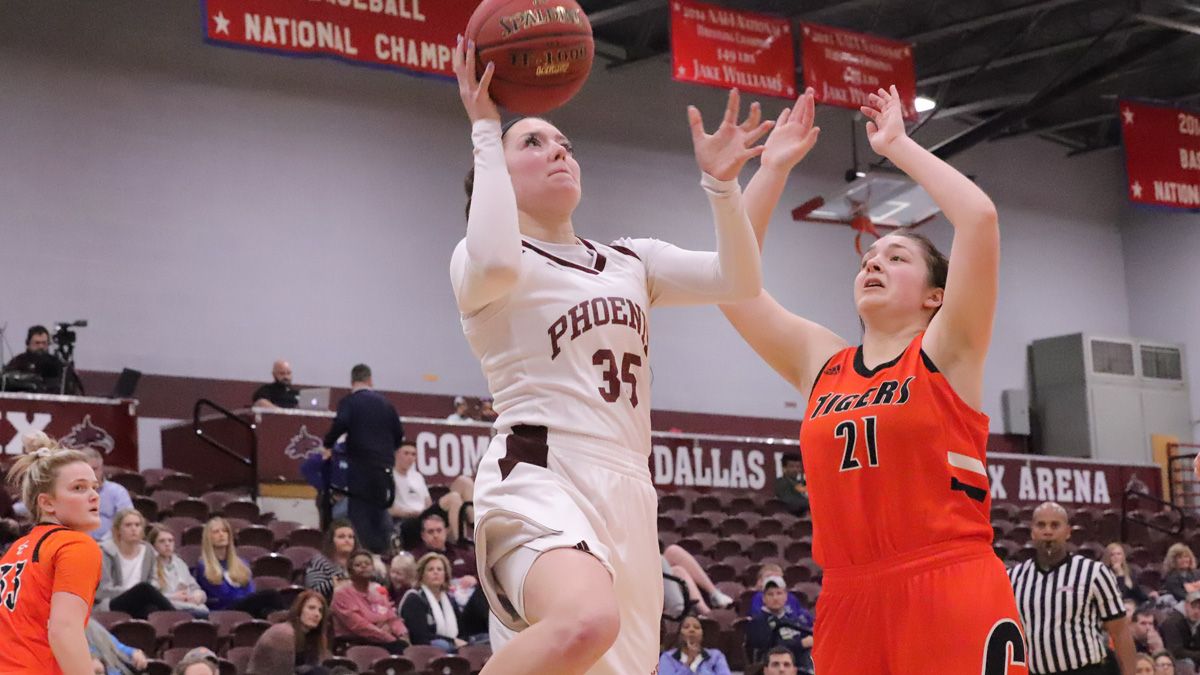 LEBANON, Tenn. – Georgetown College exploded for 51 points in the second half and Cumberland shot just 15 percent through three quarters, as the Tigers ran away from the Phoenix for a 75-47 victory in women’s basketball action here Saturday at Dallas Floyd Phoenix Arena.

The Phoenix did not score for more than eight minutes from the middle of the first quarter until a Carli Codner-Pinto basket with just under seven minutes left in the second period. Georgetown struggled from the field until the last four minutes of the first half, hitting five of its last nine shots as part of a 12-3 run to end the period.

The struggles continued in the third quarter for the home team, as Cumberland did not make a field goal from the 7:37 mark until a basket by Katherine Griffith in the first minute of the final period. The Tigers outscored the Phoenix, 23-3, over the seven-plus minute stretch, stretching its lead to 48-20.

Griffith netted a layup and two free throws for a 4-0 CU lead midway through the opening quarter. Georgetown missed its first nine shots before Stapleton hit a short jumper in the lane at the 4:33 mark, getting the Tigers on the board.

After Griffith’s two foul shots with 5:11 left in the opening quarter, the Phoenix did not score the remainder of the period, missing seven straight shots with a pair of turnovers. O’Mara literally tossed a 3-pointer at the rim just before the buzzer sounded to end the period, swishing the trifecta for a 5-4 Tigers edge after 10 minutes.

Cumberland’s offensive ineptitude continued into the second quarter with three more missed shots plus a turnover before Codner-Pinto’s drive to the basket resulted in a field goal plus the foul, but Lydia Graves nailed a 3-pointer and Martina Lytle added a short jumper to give the Tigers a 12-7 advantage.

Codner-Pinto hit a 3-pointer from the right corner, cutting the deficit to two, before Georgetown netted 12 of the final 15 points of the period over the last four minutes. Malaka Frank started the run with a 15-footer before a layup by Darnell and a 3-pointer from Ison.

Bowling’s layup and another triple by Graves increased the Tigers lead to 24-13 at intermission, as the Phoenix went 0-for-3 with a pair of turnovers to end the half after a layup by Kerrice Watson with 3:06 remaining in the quarter.

Cumberland made just 4-of-20 shots from the field and committed 14 turnovers in the first two quarters. Georgetown connected on 9-of-36 from the field but hit five of its last nine shot attempts and was also 4-for-12 from 3-point range.

Cumberland plays at 10th-ranked Shawnee State this Thursday at 5 p.m. Central Time before returning home next Saturday to face the University of Pikeville.