Univ. of Pikeville at Cumberland University | February 09, 2019
BoxscorePlay-by-Play1st Half2nd Half 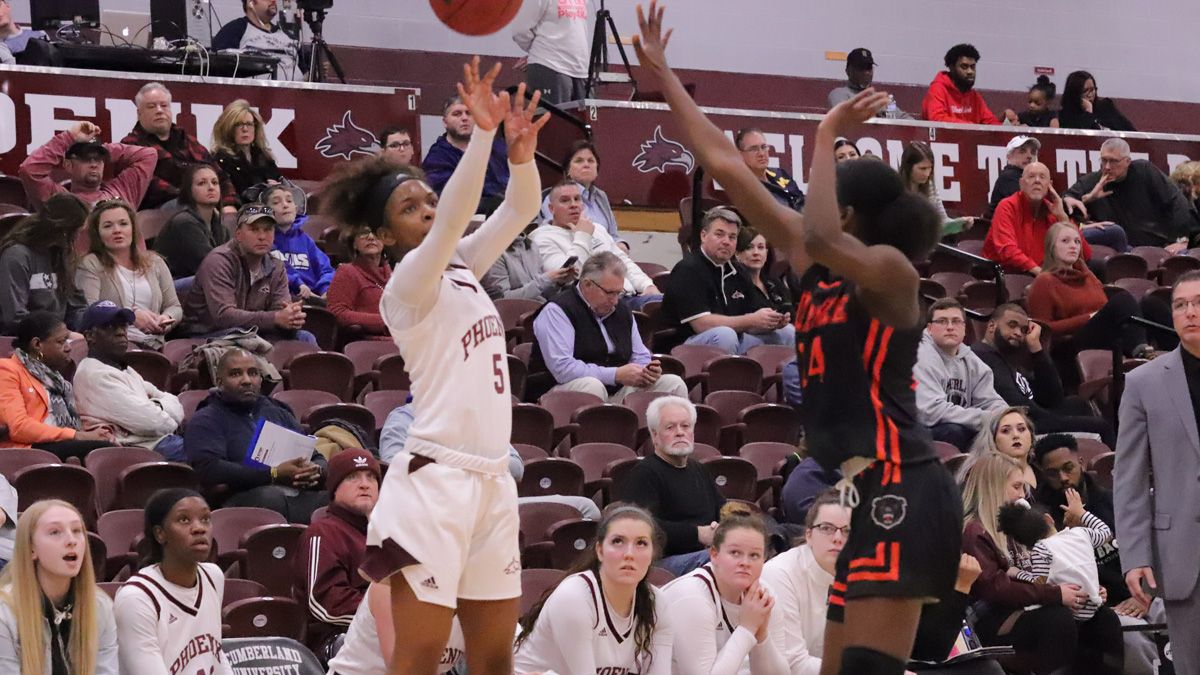 LEBANON, Tenn. – Kerrice Watson netted a career-high 20 points and Britany Miller posted 12 off the bench, but Brianna Burbridge scored 20 points and Mia Greatrex and Emily Baker each recorded a double-double in the University of Pikeville’s 75-66 victory over Cumberland in women’s basketball action here Saturday at Dallas Floyd Phoenix Arena.

The Bears used a 9-0 run to start the fourth quarter, pulling away from the the Phoenix (6-16, 2-8 MidSouth). Two baskets from Katherine Griffith and one by Torri Daniels pulled Cumberland within 65-60 with 3:13 remaining, but that was as close as the home team would get.

Layups from Mary Englert and Baker between a Cumberland turnover pushed the lead back to nine and Pikeville got an old-fashioned 3-point play from Baker and hit 3-of-4 free throws in the final 30 seconds to seal the victory.

Cumberland trailed by nine midway through the opening quarter and by four at the half. Watson’s 3-pointer in the middle of the third period made it a one-point game, but the Bears netted 14 of the next 16 points for a 56-43 advantage.

The Phoenix answered with nine straight to end the period, including layups by Dominique St. Louis and Miller before a 3-pointer from the right corner by Watson just before the quarter buzzer cut the Pikeville advantage to 56-52 with 10 minutes to play.

Watson connected on 8-of-12 shots and made three 3-pointers to go with three assists and three steals. Griffith finished with 14 points and eight rebounds despite missing most of the first half with foul trouble.

Burbridge collected 20 points and eight rebounds, hitting 8-of-13 shots, while Greatrex tallied 14 points and 10 boards and Baker netted 13 points and 10 rebounds. Englert added 11 points off the bench for the Bears, who scored 22 points off 20 Cumberland turnovers.

Pikeville put together an 11-2 run midway through the opening period, starting with a 3-pointer by Kayla Mullins. Englert hit a triple as well for the Bears and Greatrex added a basket for a 17-8 lead.

The Phoenix answered with an 8-2 spurt to end the period after a basket from St. Louis and two free throws by Briana Vandlen. Miller added two foul shots and St. Louis scored underneath again and the Bears held a 19-16 advantage after 10 minutes.

Watson posted an old-fashioned 3-point play and then a 3-pointer for Cumberland to begin the second quarter, the triple giving CU its first lead since 2-0. Pikeville put together a 9-2 run in the middle of the period highlighted by two baskets from Burbridge and one by Theodora Odia.

Field goals from Miller and Watson ended the Bears run and another layup by Miller cut the deficit to 36-32 at intermission. Watson paced the Phoenix with 12 points on 5-of-6 shooting while Miller netted eight points off the bench.

Burbridge led all scorers with 15 points, hitting 6-of-10 shots, many of those on her five offensive rebounds.

Mullins and Englert started the 14-2 spurt in the third quarter with old-fashioned 3-point plays and Englert added a layup. Greatrex then posted two straight baskets to end the run before the 9-0 stretch to end the period for the Phoenix.

Burbridge netted the first five points during the 9-0 run to start the fourth quarter for Pikeville.

Cumberland plays at 20th-ranked Lindsey Wilson on Thursday before returning home next Saturday to take on 10th-ranked Shawnee State at 2 p.m.