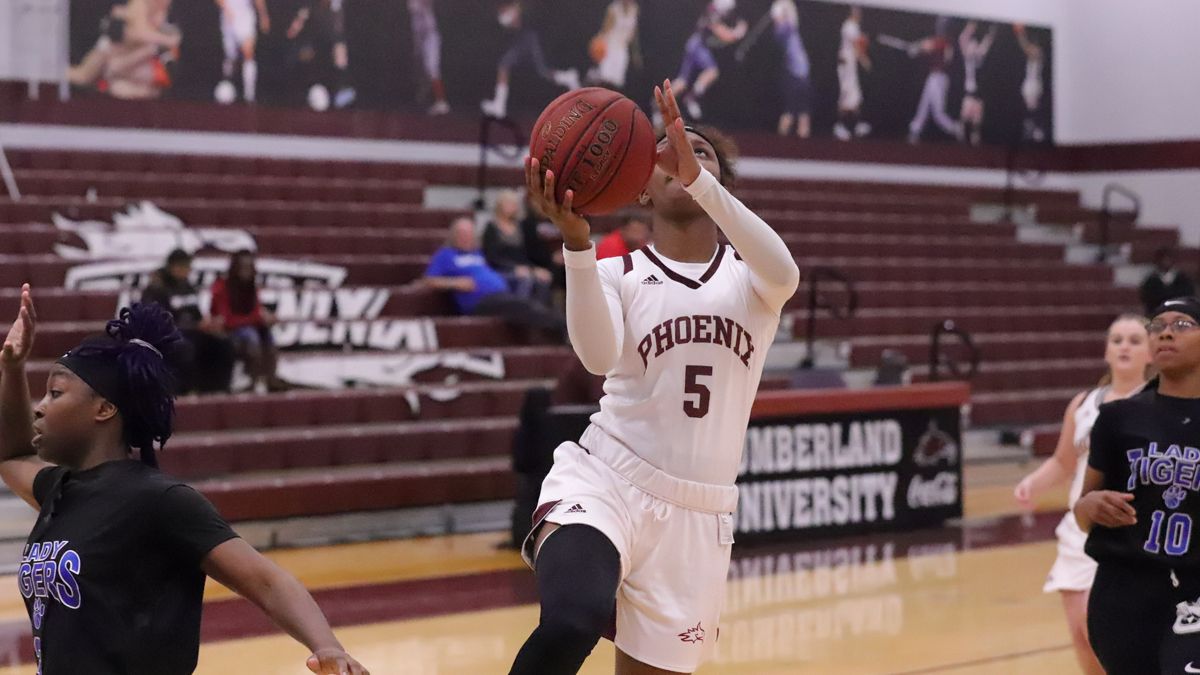 Watson was dominant on the offensive side of the ball for Cumberland, by far leading all players in scoring with 23 on 50% shooting from the field (8-of-16) and from deep (4-of-8) in addition to seven rebounds. Mackenzie Trouten and Britany Miller both put together double-doubles on the night. Trouten scored 14, nine coming from behind the arc, while grabbing 11 boards and a game high four steals. Miller also contributed 14 points to the score and one-upped Trouten with a game high 12 rebounds.

Neither team could buy a bucket to start the game; the lone score in the first four minutes of play came on a fast break layup by Watson after a Gracie Johnson steal. A Trouten jumper just inside the five minute mark extended the Cumberland lead to 9-2 The Phoenix did not make another shot from the floor through the remainder of the quarter, Vorhees charging back to take a 13-11 lead on a last second jumper.

The Cumberland scoring drought came to an end with eight minutes remaining in the half, Watson feeding the ball to Britany Miller down low to tie the game at 13-13. Cumberland took the lead back, 18-16, when Watson splashed home a wide open three from the wing at the 6:30 mark. Feeding off the momentum, Trouten found a three of her own from the deep right corner on the ensuing possession. Cumberland struggled with turnovers and creating offense for a nearly four minute following Trouten's bucket as the Tigers turned up the heat on their full-court press. After breaking the press Cumberland got the ball to Watson outside the arc for another bigtime three, 27-20. Ashlyn Pittman hit one of her own with only 22 seconds remaining to take a 30-23 advantage to the locker room.

Nine of Cumberland’s 17 points in the third quarter came from behind the arc, while they found six from the charity stripe to extend their lead through the period. Watson buried two of the shots made behind the arc in quick succession at the beginning of the third to take a 36-28 lead. The next Phoenix score also came from behind the arc, Trouten nailing a shot from NBA range to push advantage to 39-30. Miller did a great job of drawing fouls through the later portion of the third, hitting five of her seven free throws.

Miller made the first shot from the floor for the Phoenix in the fourth, bullying her man in the paint for a powerful layup and 50-40 edge. Autumn Groves got in on the scoring, getting a shot up and in down low as the lead continued to 56-45. Through the final four minutes of the game, Cumberland’s lead ballooned. Gracie Bush kicked the ball over to an open Trouten for a three and a 61-47 lead, which Watson quickly followed with an old school three-point play, getting fouled on the layup and finishing on the line. The Tigers hit two shots in the final 40 seconds of the game, but it was much too little much too late as Cumberland won 72-52.