University of Pikeville at Cumberland University | February 13, 2020
BoxscorePlay-by-Play1st Half2nd Half 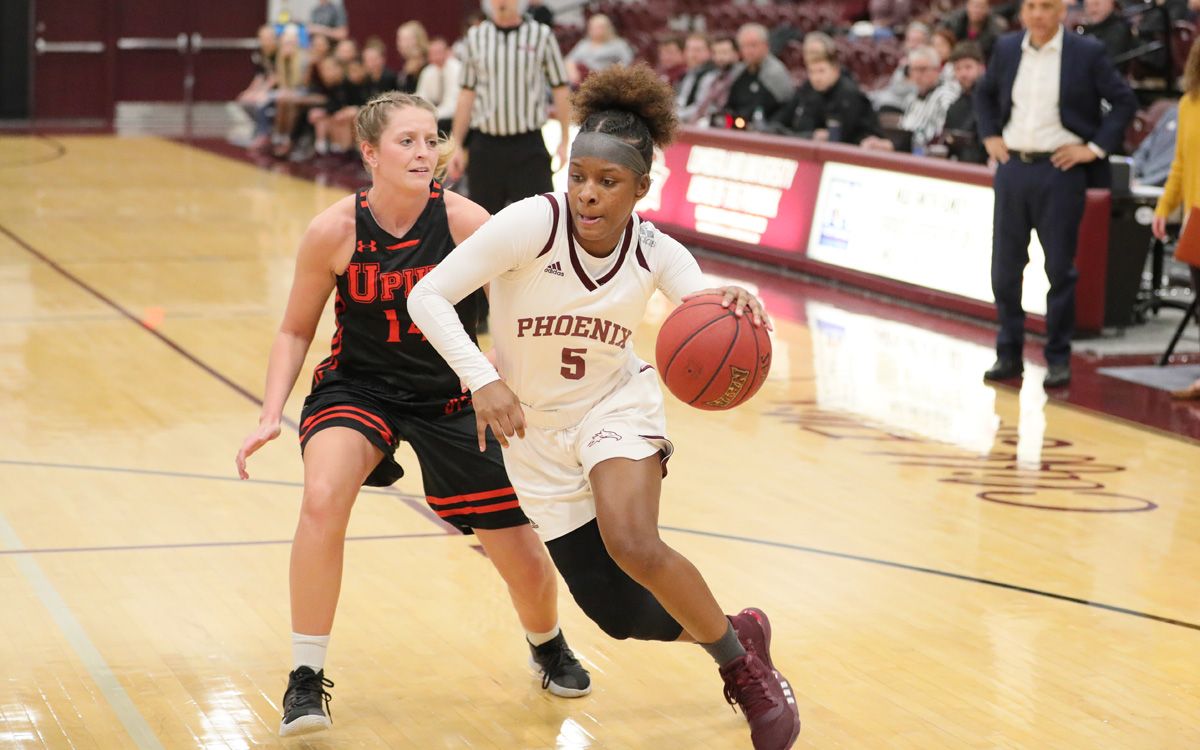 LEBANON, Tenn.--Despite jumping out to as much as an 11 point advantage in the second half, Cumberland was unable to hold on as it fell to conference foe University of Pikeville, 64-51, tonight in Dallas Floyd Phoenix Arena.

Both teams played relatively well defensively on the night, doing a good job protecting the paint, but Pikeville (15-12, 5-7 MSC) performed much better on the offensive side of the court shooting an efficient 46% compared to Cumberland (7-16, 1-11 MSC) at 25.4%.

Kerrice Watson led the way scoring for the Phoenix, scoring 11 while continuing her strong play from outside the arc (2-of-4 from three). Katherine Griffith added in 10 more, the majority of her points coming on free throws where she was 6-of-8 on the night.

All but six of the Bear’s 64 points came from their starting five, four of them breaking into double digit scoring. Mia Greatrex tied for the most points in the game at 17 despite playing only 22 minutes because of being in foul trouble the entire night. Senior guard Kayla Mullins also scored 17, including a blistering 4-of-5 from deep. Theodora Odia scored 14, while center Elisabeth Latham collected a double-double on 10 points and rebounds.

As the clock ran down during Cumberland’s first offensive possession of the night, Griffith kicked the ball out to Ashlyn Pittman on the wing where she drilled a three ball to tie the game at 3-3. Despite starting the game on the right foot, back-to-back Phoenix turnovers led to quick Pikeville buckets, forcing Head Coach Scott Blum to call an early timeout down 9-3 with 7:01 left in the first.

Pulling back within striking distance, Griffith got the ball in the paint, working the block to the side to get the ball up and in as the Bears led 13-10. After cutting the lead down, Pikeville did a good job of closing up the passing lanes near the basket, keeping the Phoenix at mid to long distance. Shutting down the interior saw Cumberland go scoreless over the final four minutes of the first, trailing 20-13.

Britany Miller ended the Phoenix scoreless streak early in the second, hitting a shot down low while fading away. After collecting her third foul at the 5:48 mark, Pikeville’s Greatrex came out as Cumberland took a page from Pikeville’s first quarter plan, locking down the paint defensively as the Phoenix did not allow another Bear basket until after halftime.

After Pikeville missed a shot that took a long back towards midcourt, Chilcutt raced through the players to collect the rebound, turning that into a fast break basket as the Bear’s lead dropped to 27-22. Momentum continued swinging towards the Phoenix as a blocked shot by Miller forced a Pikeville timeout. Coming out of the timeout Mackenzie Trouten got the ball in the far right corner, burying a deep ball to tie the game at 27. In the ensuing possession, Watson lofted up a shot of her own to take a 30-27 advantage into halftime on an 11-0 Cumberland run.

Griffith started the second half with a shot in the paint. The advantage continued to swell, moving to 37-29 as Pittman buried a deep ball from the left wing with 8:25 left in the third. Cumberland’s biggest lead of the game came with 5:08 remaining in the quarter, Watson hitting a silky smooth shot from the left wing, pushing the team’s edge to 44-33.

Following Watson’s made shot with 5:08 left in the third; the Phoenix did not make another shot from the floor until there was only 3:20 remaining in the game. A 12-0 Bear’s run to end the third saw them take a 45-44 leads into the final quarter of play where the lead only continued to expand. Griffith sunk two shots from the charity stripe to pull Cumberland within five at 54-49 with two minutes remaining, but the Phoenix were unable to get anything going, falling 64-51.

The Phoenix remain home for their next game this Saturday, welcoming ninth-ranked Shawnee State to Dallas Floyd Phoenix Arena for a 2 p.m., showdown.