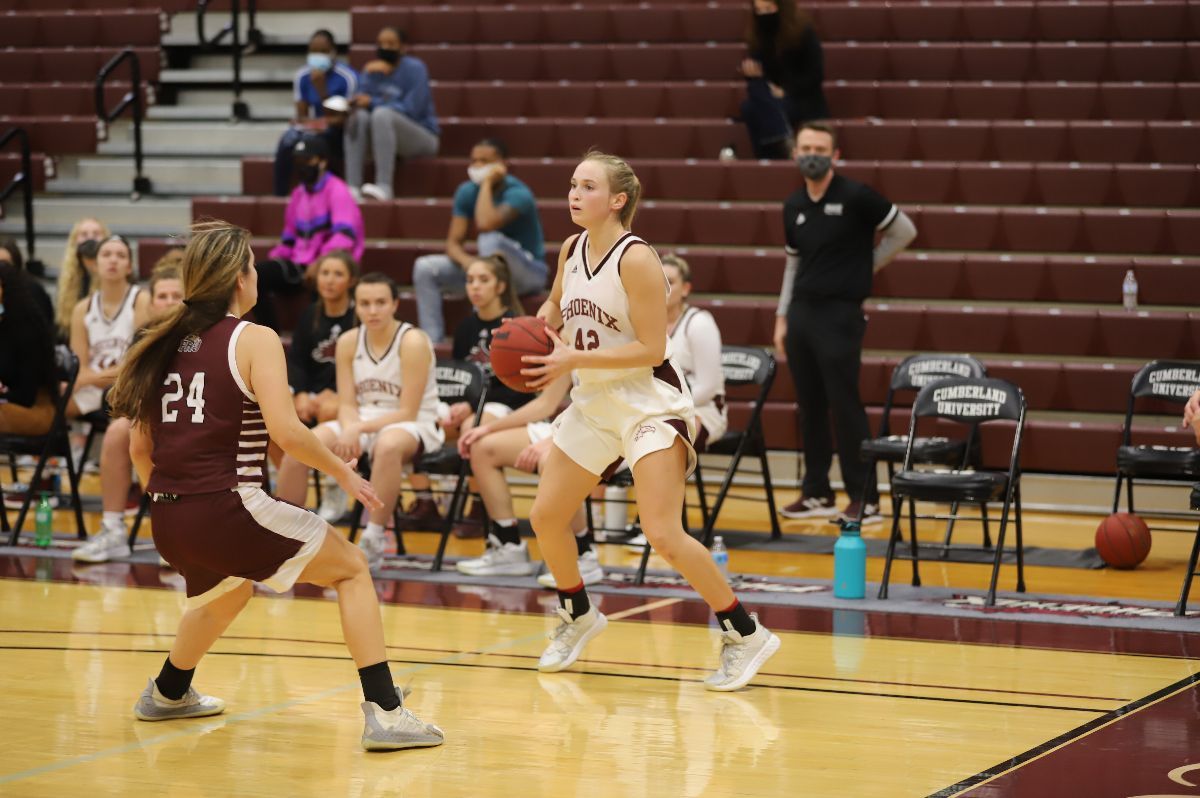 LEBANON, Tenn. -- The Cumberland  Women's Basketball team took control of the game early, jumping out to a 12-0 lead in the first quarter over Freed Hardeman in what would be a 68-61 victory for the Phoenix. Freed-Hardeman came into the game with a 5-1 record and is also receiving votes in the most recent NAIA National Top 25 Polls.

The Phoenix and the Lions both shot 44% from the field in the game, but the difference maker was that Cumberland shot 45% from beyond the arc, and Freed Hardeman could only muster a 20% three-point shooting percentage. The Phoenix also got it done from the free-throw line converting eleven of their fourteen attempts.

The player of the game for the Phoenix was the newcomer and Mt. Juliet, Tenn. native Lindsey Freeman. Freeman recorded a team-high 19 points, shot 4-5 from three, and registered five steals in 35 minutes in her Cumberland debut.

Sydnie Ward, the transfer guard from Mississippi Valley State had an excellent performance in her Phoenix Debut. Ward finished second on the team in points with 12 and also registered three steals and three assists in 29 minutes of action.

Freed-Hardeman had three players in double digits led by Kj White who went 8-13 from the field to score 17 points. Alyssa Lemay recorded a double-double for the Lions totaling 12 points and 11 rebounds.

The Phoenix almost managed to run away with the game in the first quarter, but the Lions started to show some life at the end of the first. Freed-Hardeman managed to take the lead 18-17 early in the second quarter on a layup from Kj White.

The game was back and forth throughout the second quarter with a total of eight lead changes happening before the half when the teams went into the locker room knotted up 31-31.

The Phoenix had an electric third quarter outscoring the Lions 20-8 after the half to lead 51-39 at the end of the third. Ashlyn Pittman led the way for Cumberland in the third scoring five points.

Freed-Hardeman made it interesting in the fourth, though, after a jumper from Caroline Chambers cut the Phoenix lead to 62-59 with just under three minutes left to play.

Lindsey Freeman had a big answer for that though as she drained a three-pointer on the next possession to expand the Phoenix lead back to six. Brittany Miller put the game away with 56 seconds to play after she drove into the lane and put up a layup to make the score 67-59.

The 68-61 win for Cumberland is the first win over Freed-Hardeman since 2007 and the fourth win over them in the last 23 years. This is also the first time the Phoenix Women have won their season opener since the 2017-18 season-opening win over Oakwood University.

The Phoenix next take the court against 9th ranked Shawnee State at the Dallas-Floyd Phoenix Arena on Dec. 3 at 5:30 pm.