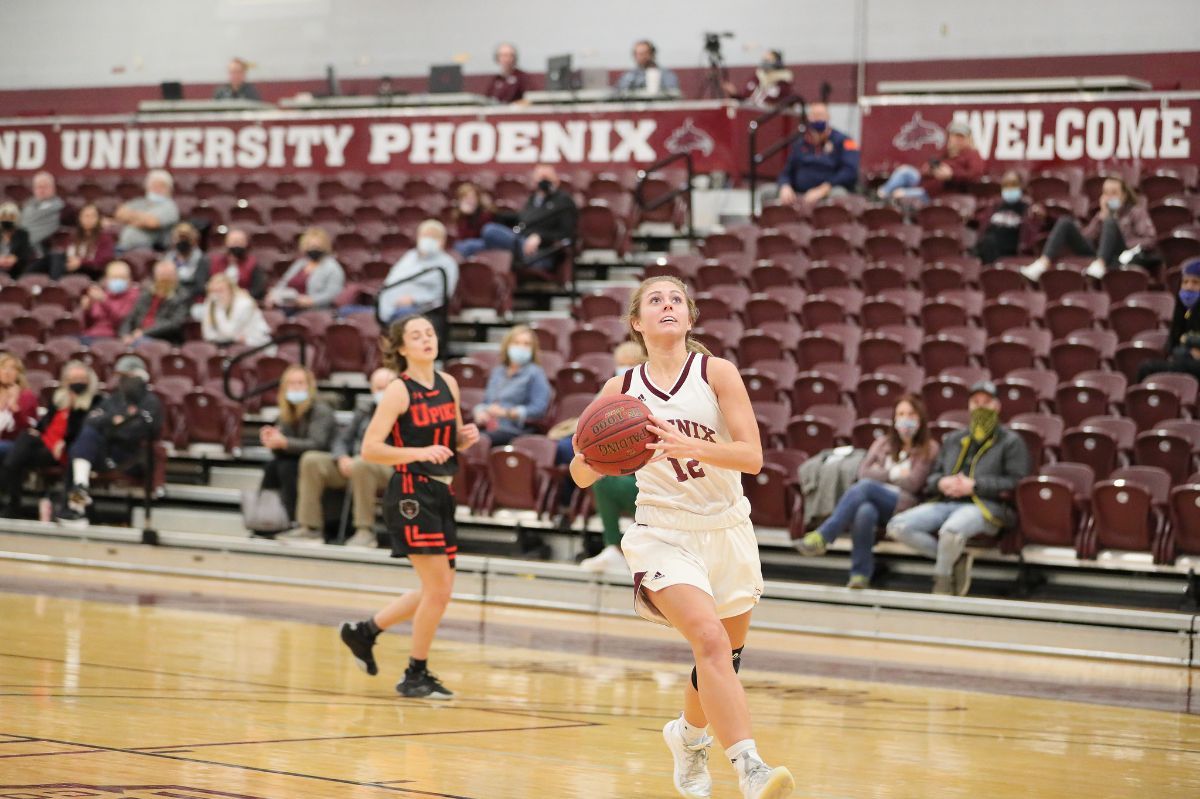 WILLIAMSBURG, Ky.--After missing the past six games due to COVID-19 protocols, Cumberland women's basketball took the court for the first time in two weeks losing to RV University of the Cumberlands 67-51.

The Phoenix started off out of rhythm opening the game without scoring in the first five minutes before Abby Morgan finally got a shot to fall. The Patriots put up six points over the scoring drought. Eubank drained a three from the top of the key to make it a one-point game before the Patriots went on an 8-0 run to take a 14-5 lead.

Britany Miller scored on a layup and converted an and-one play to close out the first quarter for Cumberland as the Patriots led 17-10.

Senior Mackenzie Trouten scored five points and Lindsey Freeman converted on three jumpers in the first five minutes of the second quarter to cut the deficit to 26-22 with 4:41 left.

Freshman Faith Eubank drained a three and Miller scored in the lane and added two from the charity stripe in the final minutes of the half, but the Patriots still held the lead 36-30.

Miller finished with 10 points, all in the first half, going 3-of-7 from the field and 5-of-5 from the free-throw line.

After a slow start for both teams in the second half, Cumberland was able to cut it down to a three-point deficit as Eubank, Freeman, and Morgan each made two-point shots to make it 39-36, but that was as close as Cumberland would get to the lead in this game.

The Patriots closed the third quarter on a 15-2 run as Cumberland got the final two points of the quarter from Ashlyn Pittman. Patriots led 54-38 going into the fourth.

Pittman went on a run as she drained two triples to open the fourth and hit a jumper to bring the score to 56-46 with 6:15 to go. Cumberlands would hold the Phoenix to five points the rest of the way as Pittman went 2-of-2 from the line and Trouten drained a triple.

Pittman led Cumberland in scoring with 12 points, 10 came in the fourth quarter, on 4-of-5 shooting in 14 minutes. Trouten, Eubank, and Freeman each ended with eight points.

Cumberland shot 35% from the field while the Patriots shot 52%. The Patriots out-rebounded CU 37-22.

Cumberland will return home on Thursday for Senior Night against Martin Methodist. The team will honor their lone senior Mackenzie Trouten in between the women's and men's games.