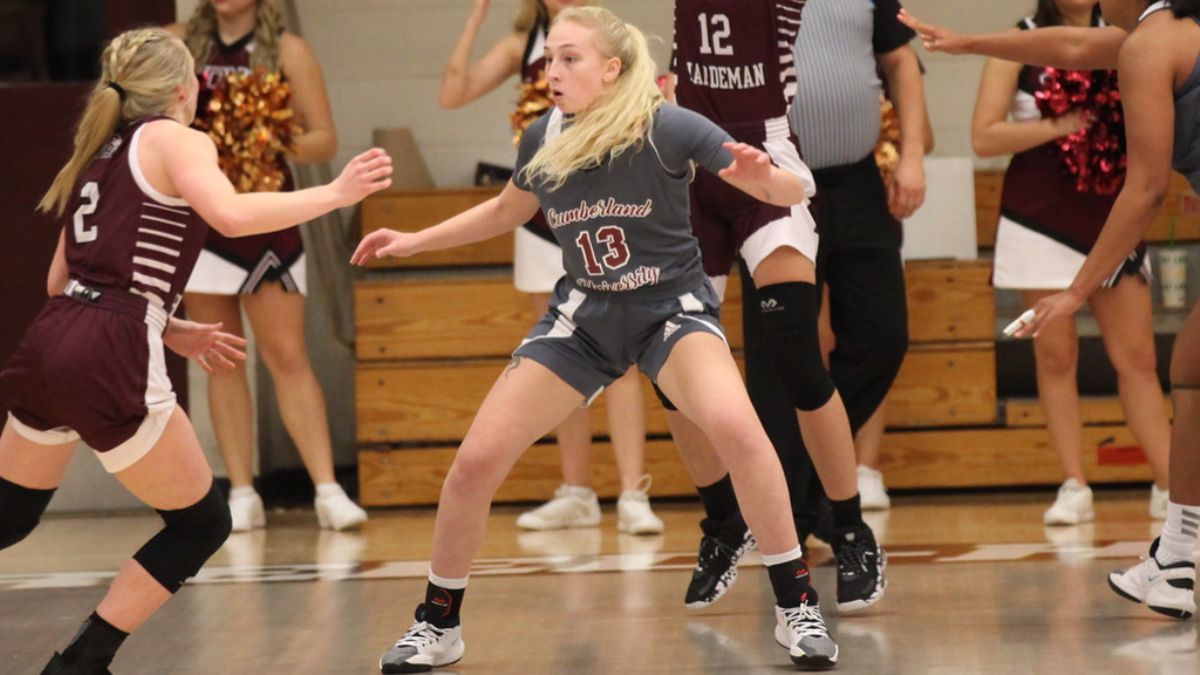 Devon Burns came off the bench for 11 points in the road win over Bethel. (Credit: Kyle Allen)
Cumberland at Bethel (TN) | November 20, 2021

MCKENZIE, Tenn.--Phoenix trailed by eight entering the fourth quarter, but rallied back to get the comeback victory in Crisp Arena over Bethel 82-79. Jana Claire Swafford hit a wide-open layup on an inbound play with nine seconds to get the lead and Tyra Johnson knocked down two free throws to seal with a second remaining.

The Phoenix had five players in double-figures led by Lindsey Freeman with 17 points on 7-of-12 from the field and 3-of-4 from deep. Tyra Johnson scored added 15 on 3-of-11 shooting. She knocked down 6-of-7 free throws and iced the game in the closing seconds.

Tierra Davis posted her second double-double of the season scoring 12 points and posted a game-high 10 rebounds. Swafford and Devon Burns each had big games coming off the bench as Swafford scored 14 points in 20 minutes and Burns added 11 points on 3-of-3 shooting and 5-of-6 from the field.

Bethel (4-2, 1-1 MSC) rarely loses in Crisp Arena but cooled off in the fourth as the Phoenix climbed back in the game. The Wildcats made 28-of-70 shots for and jacked up 33 three-pointers making 12.

The Phoenix outrebounded Bethel 37-29 and CU held the Wildcats to just 13 points off of 14 Cumberland turnovers.

Johnson scored nine of Cumberland's first 11 points to help CU on a 9-0 run early to lead 11-8 at the halfway mark in the first. Back and forth action gave the Wildcats a one point-lead after 10 minutes, 21-20.

Out of the break, Cumberland would extend the lead to nine, but the Wildcats used a huge 23-2 on their way to a 30 point quarter. Despite the big run, CU trailed by just eight heading into the fourth.

Still holding an eight-point advantage with 7:18 to play, Burns knocked down two free throws, Breon Oldham made a layup and Freeman hit a jumper to cut it to 69-67.

After a Bethel bucket, Davis hit an and-one to make it a one-point game with 4:58 to play. The Wildcats would extend the lead back out to five with 2:18 to play, but Johnson buried a three from the wing and Burns hit two free throws to tie it at 77-77.

Cumberland took a one-point lead on a free throw from Davis, but Morrow made a layup to give Bethel a 79-78 lead with 12 seconds to play.

After a timeout, Cumberland drew up a nice in-bound play to find Swafford for a wide-open layup to lead 80-79 with nine seconds to go. Cumberland made a big stop forcing Bethel into a long three-pointer and iced the game with free throws from Johnson to win 82-79.

Cumberland will have their home opener on Tuesday against Georgetown. Tip-off is set for 6:00 p.m.