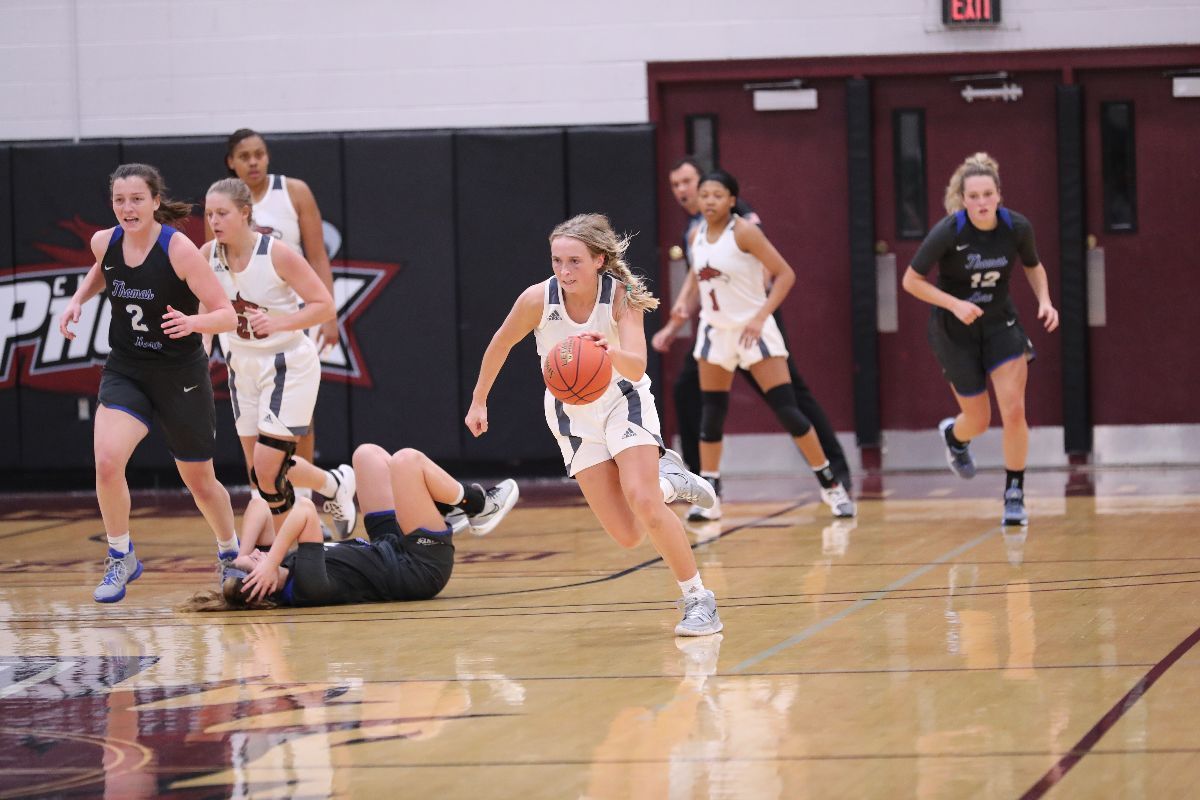 Cumberland (4-5, 1-3 MSC) out rebounded the Saints 36-32 in the game. Thomas More had a dominant performance defensively by blocking six Phoenix shots and collecting nine steals.

Johnson was Cumberland's leading performer tallying 22 points, three assists, and one steal. Lindsey Freeman provided an all around performance for the Phoenix collecting 12 points and a team high nine rebounds.

Alaina Rongos provided a spark off of the bench in her first game back from injury recording ten points, four rebounds, and two assists.

The Saints were led by Courtney Hurst who shot 4-7 from downtown recording 17 points and three steals.

The Phoenix started the game out strong defensively holding the Saints to 2-11 shooting in the first six minutes of the game. Even with the impressive start on defense, Cumberland trailed 5-4 going into the media timeout. After a pullup jump shot and an open three from Alaina Rongos, the Phoenix took a 9-7 lead over the Saints with 3:34 left in the first quarter. Thomas More took a 15-13 lead to end the first quarter after Zoie Barth drained an open three at the end of the period.

Cumberland went on a 10-5 run to start the second half to cut the Thomas More lead down to 44-43 with 6:39 left in the third quarter. The Saints would respond to extend their lead to 53-46 with 2:25 remaining in the third after a converted and one by Barth. After three Phoenix free throws and a three by the Saints, the Phoenix went into the fourth quarter trailing 58-49.

The Phoenix continued to rally off of tough basketball in the fourth quarter by fighting for rebounds and continuing to get to the free throw line. Freeman was able to finish at the rim for a strong layup resulting in an and one opportunity to cut the Saints lead down to 64-58 with 4:57 remaining in the game. Tierra Davis hits an open jump shot to cut the Saints lead down further to 66-62 with 3:29 remaining. A made three by Johnson and two made free throws from Rongos cut the lead down to three and forced Thomas More to use a time out with 22 seconds left. After free throws by both teams and another three pointer by Johnson, Thomas More would hold on to win 75-70.

Cumberland will be back in action on Saturday in Lebanon to take on Shawnee State University. Tip-off is set for 2:00 p.m. central time.