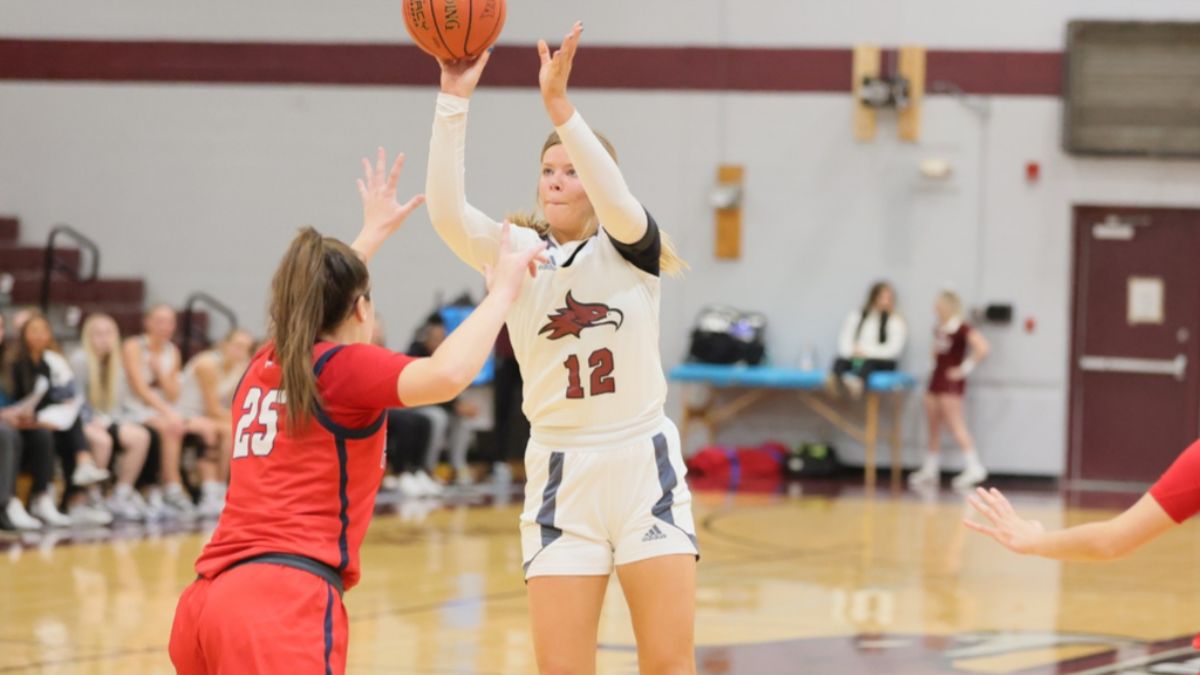 Alaina Rongos shooting a three against the University of the Cumberlands. (Credit: Steve Wampler)
Cumberlands at Cumberland | January 15, 2022

The University of the Patriots held on to defeat Cumberland 73-67 at the Rosa Stokes Classic on Saturday afternoon at the Dallas Floyd Phoenix Arena.

The Cumberlands (10-6, 4-4 MSC) took advantage of their opportunities from the line and made one more shot from the field, shooting 22-of-51.

The Phoenix forced Cumberlands into early turnovers at the start of the game that translated to Johnson and Morgan's first baskets of the game allowing CU to get up 6-1. A 4-0 run by the Pats brought it back to a one-point game before Johnson and Morgan drained back-to-back triples to make it 12-5 with 4:48 left in the first.

The Phoenix held on to the lead with threes from Johnson and Swafford to close out the first quarter with a 20-15 lead.

The Patriots started the second quarter with a 15-1 run to take the lead before Johnson made her second three to stop the drought. Johnson got two to go from the line to cut it to 30-26. The Patriots pushed the lead out to eight at half, 37-29.

Johnson opened up the second half with her third three of the game and Alaina Rongos followed with a layup. The Cumberlands made 1-of-2 free throws from the free throw line and a triple Jaiden Cox to push it back to six. Lindsey Freeman came to life drilling athree from the corner and then took a steal all the way for an-and-one three-point play to cut it to 45-42 with 4:36 left in the third.

The Patriots had the answer with a three of their own and a two-point basket from Abbi Douglas to push the lead back out to nine. Rongos found her shot late in the third hitting from 12 feet twice to bring it back to 52-48. Freeman was sent to the line as the Cumberlands fouled to put the Phoenix in the bonus ending the third quarter trailing 53-50.

Trailing 58-54, Swafford was called for a foul in the paint causing head coach Scott Blum to receive a technical foul giving the Patriots three points and a seven-point lead. Cumberlands would add one more from the line before Johnson scored two in the paint.

The Patriots would however hit their free throws down the stretch and csend the Phoenix to a loss at home.

Cumberland's game on Monday at Lindsey Wilson has been postponed due to COVID protocols. The Phoenix's next game will be at Shawnee State next Thursday. Tip-off is set for 5:00 p.m. central time.