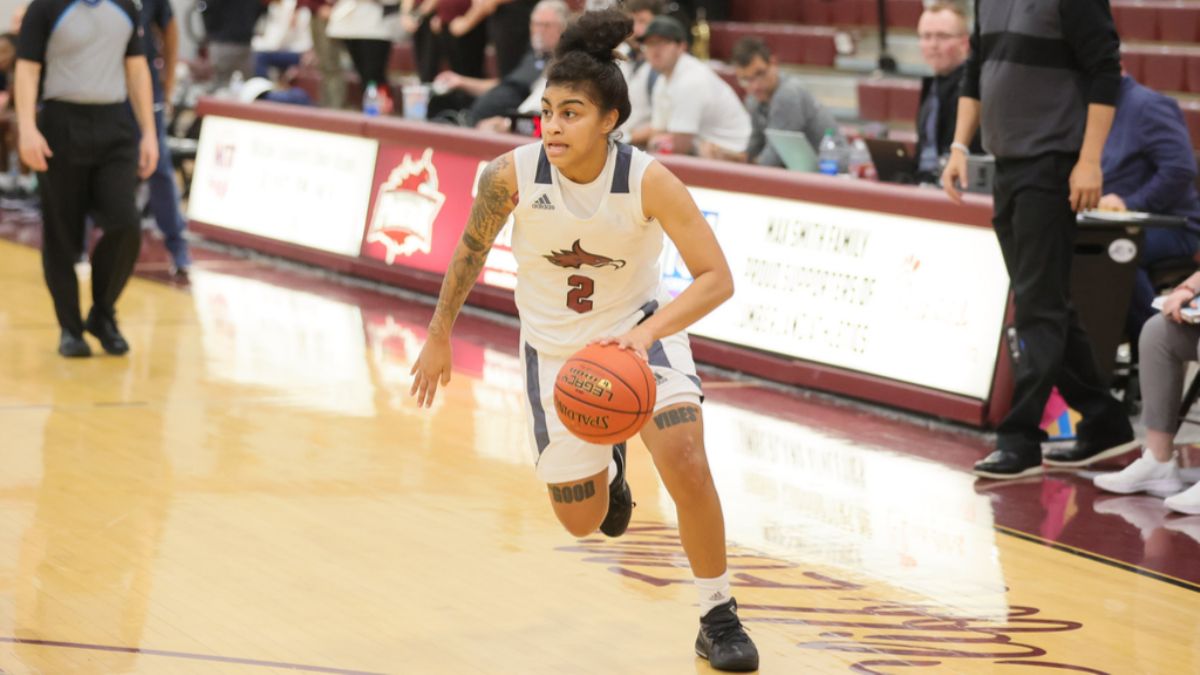 Tyra Johnson was huge down the stretch leading CU in points with 25 points in the win. (Credit: Steve Wampler)
Cumberland at Georgetown | February 02, 2022

GEORGETOWN, Ky.--Cumberland rallied from down by 15-points in the fourth quarter to send it to overtime. Cumberland got the defensive stop to escape Georgetown with a road win in overtime, 70-68.

Cumberland (10-11, 5-9 MSC) jumped out to a hot start, getting up by 11-points in the first quarter, but fell cold shooting in the ball from the second quarter until the final frame. The Phoenix erupted back from a 15-point deficit in the fourth and find a way down the stretch to make plays to get the win.

The Phoenix shot 24-of-79 from the field for 30.4% and made nine triples. Cumberland hit 13-of-18 from the free throw line including seven from the cahrity stripe in overtime.

Tyra Johnson led CU in scoring with 25 points, 13 of the points came in the final five minutes of the fourth and in overtime. Lindsey Freeman added a double-double with 14 points and 12 rebounds.

The game started with a free throw by the Tigers, but a 7-0 run as Morgan and Freeman both made two-pointers and Johnson drilled a three-pointer. Jazzmyn Elston matched the three from Johnson, but another 8-0 spurt with threes from Sexton and Rongos pushed it to 11 at the media timeout, 15-4.

Georgetown held Cumberland scoreless over the next four minutes before Morgan drained a three pointer to hold the lead at the end of the first 18-13.

To start the second quarter, Cumberland began to fall cold allowing the Tigers to hold them scoreless over four minutes and tie the game at 18-18. An 11-5 run for the Tigers over the next four minutes gave Georgetown a 29-23 lead. Before the horn, Johnson hit a three, but Georgetown scored on the final play for the halftime score, 33-28.

Georgetown started the third quarter with a 8-0 run to push the lead out to 13 points after just two minutes of game clock. Lindsey Freeman hit a wide open three and Grace White hit a two for the Tigers before both teams fell ice cold for the next five minutes. White ended the drought with a three and Cumberland closed the quarter on a 5-2 run trailing 48-36 headed to the fourth.

After the Tigers pushed it out to a 15-point lead, Cumberland stormed back with an 8-0 run as Alyssa Goehring scored four points in the lane. Trailing 54-46, Johnson scored five points and Freeman got two to go from the line to cut it to a one-possession game. Rongos buried a three and Morgan scored on a tip-in to cut it to two. Johnson hit two free throws to tie it with 56 seconds left. After Georgetown made 1-of-2 from the line, Johnson was sent back with a chance to take the lead with nine seconds. She missed the first and made the second to tie it again at 61-61 where it stood to go to overtime.

Cumberland started the overtime with three free throws from Johnson as she was fouled on a triple. Freeman and Johnson each made one free throw as Darnell made one-of-two for the Tigers. Freeman hit a tough layup to go up by six. A 4-0 run by the Tigers brought it back to two before a pair from the line by Johnson put it to 70-66 with 23 seconds. Georgetown hit a layup with 14 seconds and then on the ensuing rebound the Phoenix lost it out of bounds giving Cumberland a chance. Cumberland's defense stepped up and did even allow a shot by Georgetown to get the hard-fought 70-68 win.

Cumberland will stay on the road on Saturday to take on #4 Campbellsville at 1:00 p.m. on Saturday.