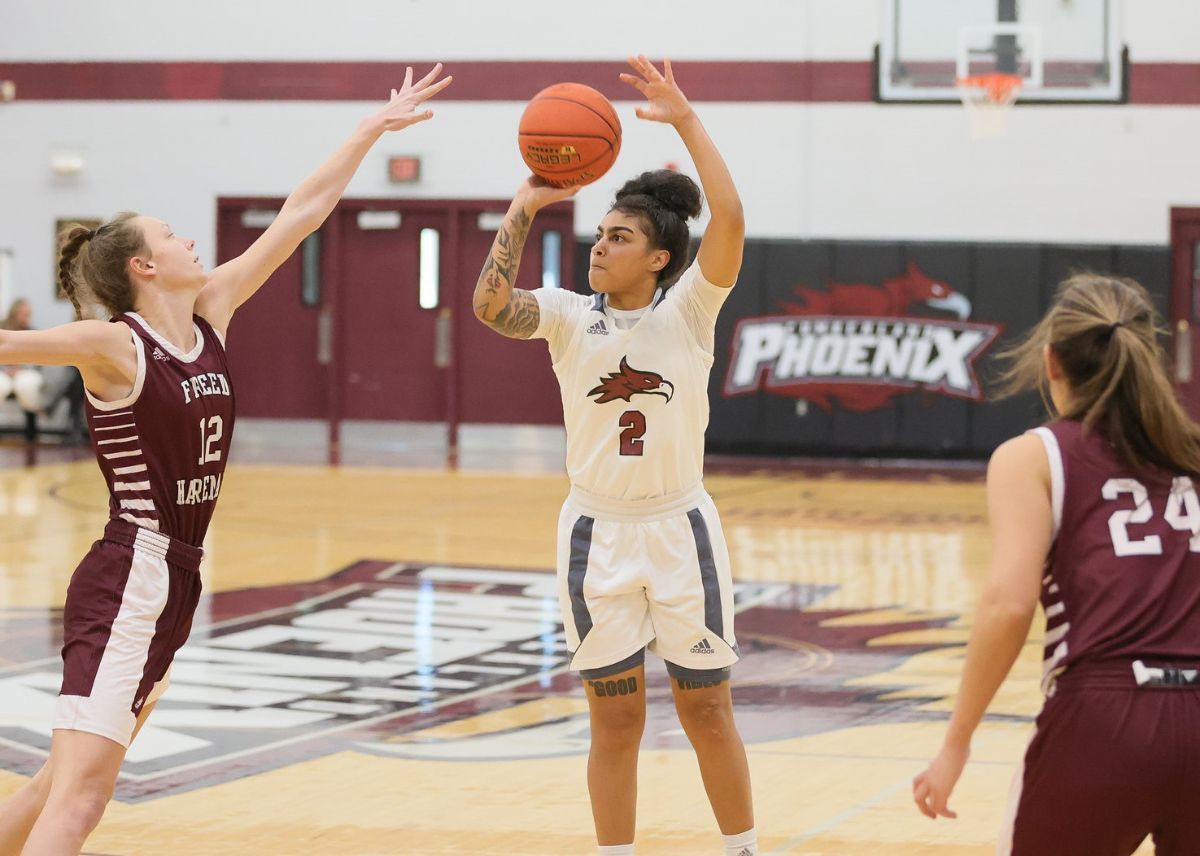 With 24 points in the win, Tyra Johnson surpassed 1000 in her career (Credit: Steve Wampler)
Cumberland at Lindsey Wilson | February 14, 2022

Cumberland opened the game with a bucket in the paint from Tyra Johnson to take a 2-0 lead. Johnson scored the first seven points for the Phoenix that saw them up 9-3 at the 7:12 mark. Lindsey Wilson went on a 6-0 run to tie up the game after that, both teams played a back and forth game for the rest of the first quarter. CU went into the second down 17-16 to the Blue Raiders.

The Lindsey offense kept up the scoring, but with every bucket, there was a Phoenix response. Alaina Rongos hit a deep three to tie the game at 23-23 with 6:22 to play in the first half. Johnson added another three on the next possession to give Cumberland a 26-23 advantage at the 4:32 mark. The team held that lead until Hailey Ison of Lindsey Wilson scored on a layup with 44 seconds left in the half. Cumberland went into the break down 29-28.

Neither team shot the ball well early as the Phoenix had shot 31 percent from the field and 20.8 percent from three while the Blue Raiders went into the half with a 36.7 field goal percentage and a three-point percentage of 20.8. The leading scorer for the Phoenix at the half was Tyra Johnson with 14 points on 5-10 shooting, followed by Lindsey Freeman with seven points on 2-5 shooting.

Cumberland scored the first bucket out of the break on a layup from Johnson as the Phoenix retook the lead 30-29. CU hung around throughout the rest of the game as Lindsey Freeman answered a Blue Raider three-ball with one of her own to tie it up at 38-38 with 4:19 to play in the quarter. The Phoenix retook the lead 41-40 at the 2:57 mark in the third on a deep three from Johnson. Breon Oldham drove in for a layup late in the third that gave Cumberland the 45-42 advantage heading to the fourth quarter.

Lindsey Wilson had the first two baskets of the fourth quarter, tying the game up at 45 all. Two threes in under a minute by Johnson gave Cumberland a 53-49 lead with just under five minutes to play. The Blue Raiders fought hard to get back into the game and even cut the CU lead to 55-54. Keara Sexton converted a layup with 1:53 to play in regulation that gave the Phoenix a 57-54 advantage. Cumberland played excellent defense down the stretch and downed Lindsey Wilson 60-58.

The game was highly contested between the two teams and had seven lead changes from start to finish. Lindsey Wilson had the better field goal percentage at 40 percent than Cumberland, who finished with 37.7 percent. The Phoenix, however, had the better three-point percentage of 36.4 compared to the 30 percent of the Blue Raiders. The biggest difference in the game was the ability of CU to get to the line as they finished with 12 made free throws to the eight of LWC. Cumberland was outrebounded 34-29 on the day by the Blue Raiders.

Tyra Johnson led the Phoenix in scoring with 24 points on 8-19 shooting from the field. With her performance, Johnson crosses the 1000 career point plateau. Lindsey Freeman put up a solid performance in her comeback for the Phoenix as she had 14 points on 4-8 shooting. Keara Sexton had a solid performance as she had nine points and finished second on the team in rebounds with seven. Misia McKinney led the team in rebounds with eight total to go along with six points in 26 minutes of action.

Cumberland is back at home after a three-game road stand to take on Life at home on Thursday, Feb. 17 at 6 p.m.