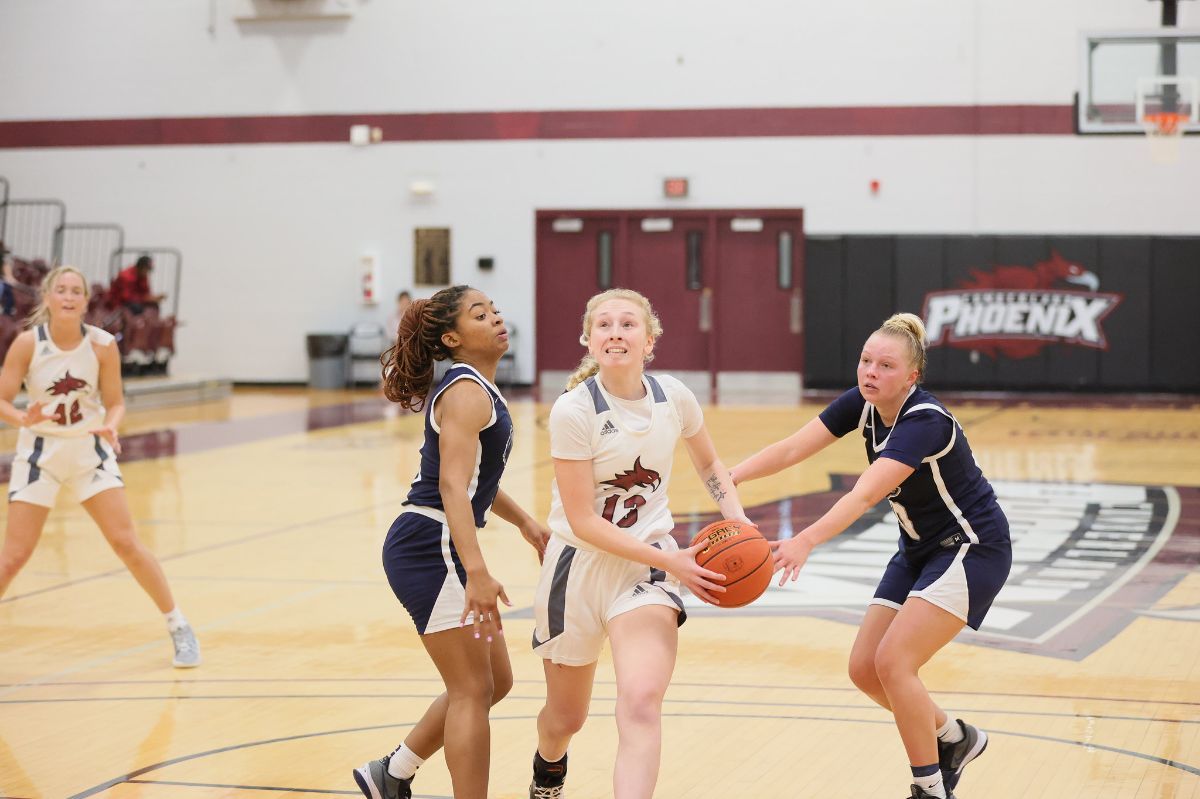 Cumberland established a high-energy offense early and kept it that way through the entire first quarter. Tyra Johnson came out of the gates ready to let the three-ball fly as she drained the first bucket of the game to give CU the early advantage. Keara Sexton was also aggressive with the ball in her hands, taking the ball into the paint and converting on the three-point play to give Cumberland a 6-2 lead at the 6:26 mark.

The Running Eagles got back into the game at the 3:37 mark, tying up the game at 10-10. The Phoenix never stopped pushing as they finished the first quarter with a 21-12 advantage after back-to-back corner threes from Lindsey Freeman and Devon Burns. CU shot the ball exceptionally well in the first, going 50 percent from three and 41.2 percent from the field.

Cumberland stayed hot from beyond the arc into the second quarter, as the Phoenix hit three-pointers on three straight possessions to open the frame. Misia McKinney drew a foul at the 6:44 mark in the quarter, hitting both free throws to give the Phoenix a 32-16 lead over the Running Eagles. The stifling defense of the Phoenix held the Running Eagles to shooting 36 percent from only 21 points in the first half. Johnson hit the final bucket of the half to give CU a 38-21 advantage.

The Phoenix shooting percentages fell off a bit from the end of the first quarter as they went into the break shooting 35.3 percent from the field and 43.8 percent from the line. Life ended the half with a 36.0 field goal percentage and a 10 percent mark from behind the arc. Individually, Johnson led the Phoenix with 13 points going 5-12 from the field followed by Devon Burns with six points. Keara Sexton, Jana Caire Swafford, and Lindsey Freeman added five points apiece to the CU total.

Freeman got the scoring started for the Phoenix in the third quarter as she hit a fadeaway jumper to get the Phoenix to the 40 point mark. Beginning at the 6:18 mark in the third, Cumberland scored on four straight possessions to grow their lead to 50-27 over Life. Kennedy Powell came off the bench and added four quick points to bring the advantage to 54-31. Johnson scored the final bucket of the quarter for the Phoenix on a free throw to give them a 55-31 advantage heading into the fourth.

Jana Claire Swafford hits the first Cumberland bucket of the fourth on a deep three to give CU a 58-33 lead. The Phoenix started to slow the game down to burn up as much clock as possible. Burns followed that up with a three-pointer of her own at the 8:55 mark to give CU a 28 point lead over the Running Eagles. The Phoenix played a conservative final few minutes to finish the game. Freshman guard Mackenzie Butler saw her first minutes as a Phoenix down the stretch and scored the last two points in the game to give the Phoenix a 69-44 victory.

On the day, Cumberland shot 39 percent (23-59) from the field and 43.5 (10-23) percent from behind the arc. Cumberland took 12 more shots than Life during the game and recorded nine fewer turnovers than them on the day. The Phoenix also held the Runnin Eagles to 13.3 (2-15) percent from three-point range and outrebounded them 37-30.

Tyra Johnson led CU with 22 points on 8-15 shooting from the field. The performance marks her 12th game of 20 or more points as a member of the Phoenix. Fellow senior Devon Burns also had a great performance for Cumberland as she notched nine points, going 3-5 from three-point range. Lindsey Freeman also posted nine points to go along with seven rebounds. Kennedy Powell had the second-highest rebounding total for the Phoenix with five off the bench.

Cumberland is back on the court with a quick turnaround as they take on Tennessee Southern tomorrow afternoon at 2 p.m. with Senior Day festivities happening before tip.