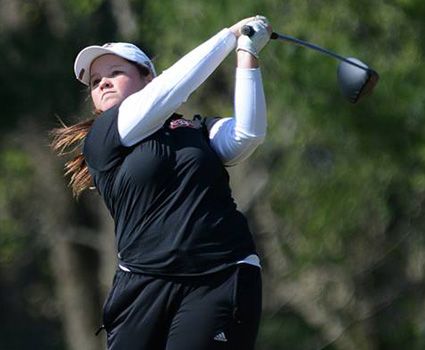 LEBANON, Tenn. – Sophomore Abbey Burgdorf and Morgan Stuckey shot 82 and 83, respectively, to lead the Cumberland women’s golf team in the opening round of the Mid-South Conference Spring Invitational on Monday at Campbellsville Country Club in Campbellsville, Ky.

Burgdorf began her round with a bogey on No. 11, but birdied the par-5 12th. The Ashland, Ohio, native made four more bogeys on the back nine before settling down with five pars on the front side. She made a bogey on her final hole for the 10-over par 82, tied for ninth overall.

There were just five rounds in the 70’s on the day, with Campbellsville University’s Cassidy Scantland and Kaitlin Riley from the University of the Cumberlands each shooting one-over par 73 to hold a three stroke lead.

Stuckey got off to a bad start with a triple bogey on the par-4 10th hole, but she then recorded four straight pars before three bogeys and then a birdie at No. 18. The Milan, Tenn., native made four pars and four bogeys on the front side for an 83, tied for 14th and just one shot from the Top 10.

Sophomore Savanna Strode started her round with a double bogey on No. 10 and bogeys on 11 and 13 as well before netting a birdie on the par-3 16th hole. The Celina, Tenn., native triple bogeyed the par-4 17th and made a bogey on No. 18 to make the turn. She registered just three pars on the front side, collecting a birdie on the par-5 seventh hole but also two bogeys, two doubles and a triple on her last hole of the day. Strode finished with an 87, tied for 28th.

Junior Kaleigh Chitwood registered only one par on the back nine with four bogeys and four doubles. The Lafayette, Tenn., native made two more pars on the front side, carding an opening-round 94, tied for 43rd.

Freshman Anna Leigh Cleveland struggled with big numbers on the back nine, recording one par and two bogeys but six others. The Lebanon, Tenn., native played better on the front side with a birdie on the par-5 seventh hole along with one par and five bogeys. She shot 101 for the round, good for 48th.

Cumberland posted a team score of 346, sixth among nine teams in the field. They trail third-place Bellarmine University by eight strokes heading into Tuesday. Second-round action is scheduled to start at 7:30 a.m. Central Time on Tuesday, barring any delays because of frost.