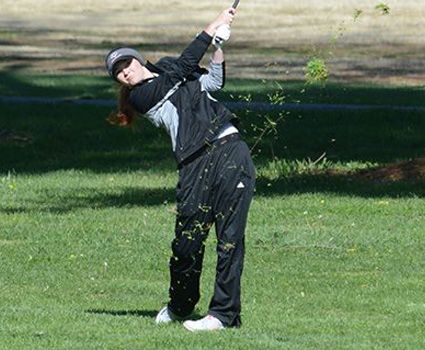 LEBANON, Tenn. – Sophomore Savanna Strode posted a second-round 80 and Morgan Stuckey carded an 82, with both players finishing in the Top 15 on Tuesday during the Mid-South Conference Spring Invitational at Campbellsville Country Club in Campbellsville, Ky.

Cumberland moved up one spot to finish fifth in the team standings, shooting 346 for the second straight round.

Strode began her round on hole 14, collecting a pair of pars and two bogeys but also a double bogey before making the turn. The Celina, Tenn., native made two birdies and four pars on the front nine for an eight-over par 80 and a two-day total of 167, tied for 14th.

Stuckey started her round with four pars before a double bogey on No. 17 and then a bogey. The Milan, Tenn., native birdied the par-5 first hole but registered just three pars and four bogeys on the front side. She also made bogey on her final two holes for a second-round 82 and a two-day total of 165, finishing 10th overall.

Sophomore Abbey Burgdorf double bogeyed her first hole of the day, the par-4 13th, but recorded three pars before a pair of bogeys to make the turn. The Ashland, Ohio, native struggled on the front side with four doubles but ended the round with two pars. She shot 87 on Tuesday and 169 for the 36 holes, finishing 18th.

Junior Kaleigh Chitwood also began her round with a double bogey, this one on the par-4 15th hole, and posted two bogeys and a par before making the turn. The Lafayette, Tenn., native did not register a par on the front nine, making three bogeys along the way, but had two pars in her final three holes. She carded a second-round 97 and tied for 45th overall.

Freshman Anna Leigh Cleveland started her round on No. 15 as well and made three bogeys and a par to end the back nine. She also struggled on the front nine, recording just one par and three bogeys, and added another bogey on No. 12. The Lebanon, Tenn., native shot 99 on Tuesday and finished 49th.