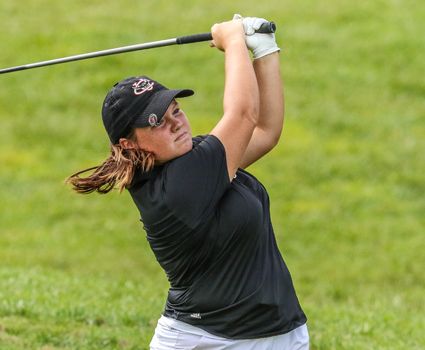 Sophomore Morgan Stuckey carded a second-round 77 and Cumberland moved up two spots to third on Tuesday at the Mid-South Conference Championships. (Credit Univ. of the Cumberlands)

LEBANON, Tenn. – Sophomore Morgan Stuckey shot five-over par 77 and Cumberland posted its best team score since the opening tournament of the fall with a 314, moving up two spots into third place on Tuesday in the Mid-South Conference Women’s Golf Championships at Bowling Green Country Club in Bowling Green, Ky.

Action in the conference tournament concludes Wednesday, with the first tee time for the Phoenix at 9:20 a.m. at No. 10.

The women began their rounds on No. 1 on Tuesday and Stuckey struggled on the front nine, posting two bogeys and two double bogeys as well as a birdie on the par-5 fifth hole. The Milan, Tenn., native settled down on the back nine, registering one bogey and a birdie on the par-3 11th hole. She is tied for eighth overall and is just three strokes from the Top 5.

Freshman Tessa Barto and sophomores Savanna Strode and Abbey Burgdorf all carded second-round scores of 79 and stand in the Top 20 heading into Wednesday’s final round.

Barto took seven strokes off her first-round score, collecting three bogeys and a double on the front nine. The Spring Hill, Tenn., native birdied No. 11 and made two bogeys on the back side for her 79. She is tied for 18tth overall.

Strode started the round with a bogey but put together five straight pars before ending the front nine bogey-birdie-bogey. The Celina, Tenn., native had a bogey at No. 10 before five consecutive pars again. She finished on a bad note with two bogeys and a double and is tied for 15th.

Burgdorf had an up-and-down day, beginning her round with a triple bogey at the first but posting four pars in the next five holes. The Ashland, Ohio, native birdied the par-3 seventh hole but then recorded five straight bogeys. She ended the streak with a birdie at the par-3 13th hole and added another birdie at No. 16. Burgdorf is also tied for 18th overall.

Freshman Anna Leigh Cleveland struggled in her round on Tuesday, registering just three pars and eight bogeys en route to a 100. The Lebanon, Tenn., native is 35th heading into the final round.

Cumberland stands third among the seven teams in the field, five shots ahead of Lindsey Wilson and 10 strokes in front of the University of Pikeville.