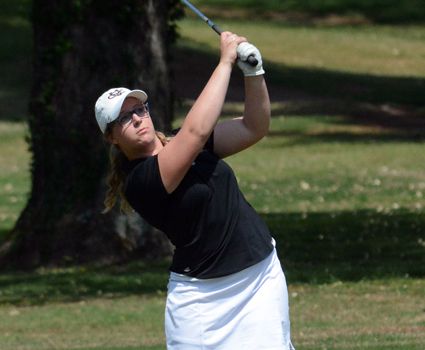 With the women starting their rounds on the back nine, Burgdorf played even through 11 holes with nine pars, a birdie on the par-5 14th and a bogey at No. 17. The Ashland, Ohio, native netted bogeys on holes three and four before two pars. She birdied the par-4 eighth hole and finished with a bogey for her three-over 75, placing 12th in the final standings.

Stuckey struggled through her opening nine holes, recording five bogeys, three pars and a double on the par-5 14th. The Milan, Tenn., native collected three pars and a birdie on the par-3 third hole to start the front nine but ended the round with three bogeys on the last five holes. She shot a final-round 81 and placed 10th overall.

Strode began the round with a bogey at No. 10 but put together four straight pars and then two bogeys before a birdie on the par-4 17th. The Celina, Tenn., native registered seven pars on her second nine but had a triple bogey at No. 4 and a double on the final hole for a third-round 79. She tied for 14th overall with a three-day score of 243.

Freshman Anna Leigh Cleveland, battling a groin injury the whole tournament, posted only two pars and had 10 bogeys in the final round, carding a 96 and tying for 35th. Freshman Tessa Barto shot 43 on her first nine but struggled mightily on the final nine, finishing at 98 for the round and 30th overall.