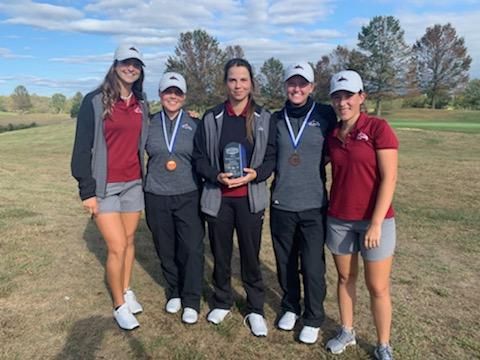 The Phoenix shot 56-over for the tournament, beating the third place team, Lindsey Wilson, by 18 strokes. The women came up 17 strokes short of sixth-ranked, tournament winner Cumberlands (Ky.). Three Cumberland players scored in the top-10, while all of them were within the top-25 individually.

Freshman, Tilde Rolandsson led the way for Cumberland, starting on the eleventh hole on her way to an eight-over, 80, to stay in a tie for third overall. Rolandsson got off on a bad foot, shooting a triple bogey on the first hole, but managed to par 12 of the remaining holes on a day when there were few good scores.

Raquel Romero Valverde moved up from a tie for 11th to a tie for sixth, shooting a four-over, 76, on her way to finishing 13-over for the tournament. The senior was one-under on the day through six after recording back-to-back birdies on 15 and 16, before earning five bogeys the rest of the way through.

Another freshman, Ida Lihufvudh, carded the third best overall tournament for the team, tying for sixth at 13-over. Lihufvudh sat at one-over through 14 after a birdie on the seventh, but bogeying three of the final four holes pushed her to a four-over, 76, on the second day.

In her first appearance of the season, senior Ana Laura Pages Preuss finished 12th overall with an 18-over, 85, carding nine bogeys and two doubles in the second for a 13-over day.

Maria Pilar Scenna shot a 14-over, 86, on her way to falling back into a tie for 21st. The sophomore shot 25-over for the two days of the tournament.

The women’s next tournament will be at the Roadrunner’s Women’s Invitational in Cohutta, Ga., at the Nob North Golf Course from October 20-22.