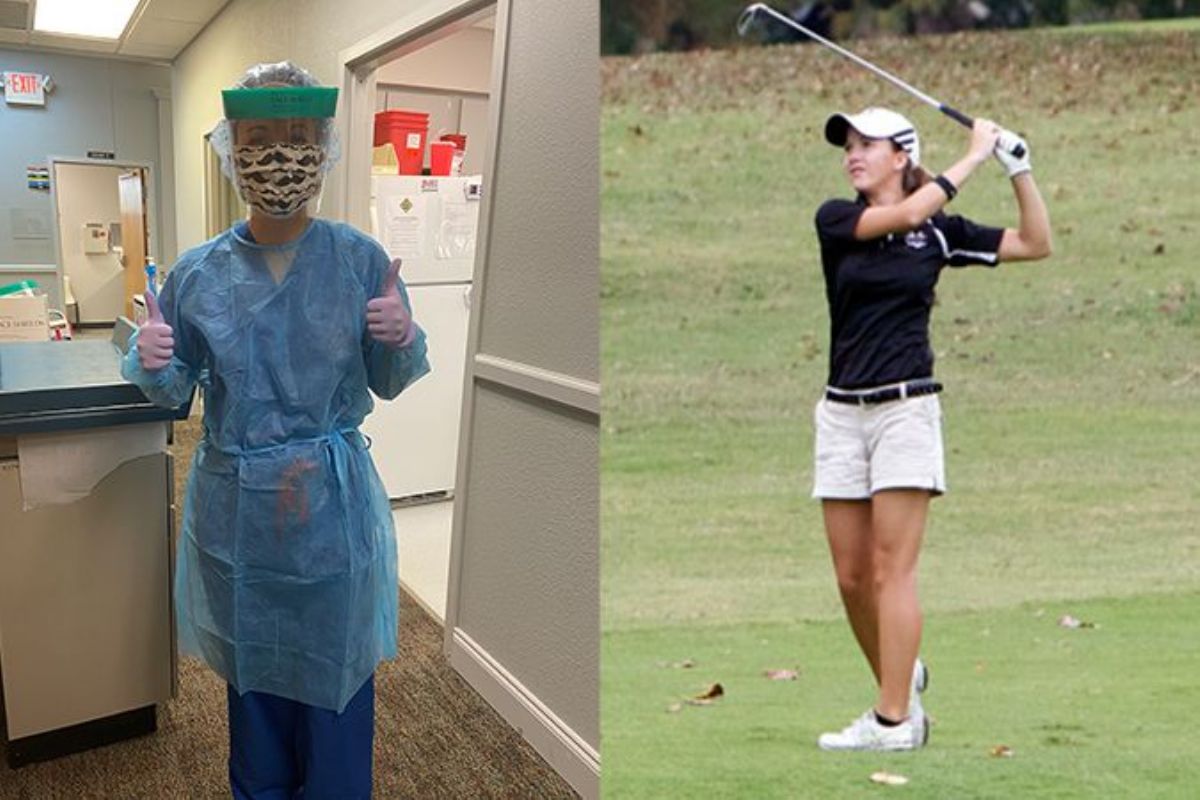 LEBANON, Tenn.--Former Cumberland University women’s golfer and 2013 grad, Dr. K.C. McGinley has gone on to obtain her MD and is now a physician in Jackson, Tennessee during the COVID-19 pandemic.

Dr. McGinley is a native of Savannah, Tennessee where she attended Hardin County High School. She lettered four times in golf and tennis making the golf state tournament three times and was the region runner-up in 2008. She also was the tennis district champion but was ready to move on and focus on her academics in college until she received a phone call from the head coach at the time, Scott Wilkerson, who was restarting the women’s golf program after a five-year hiatus.

“I initially did not intend to play sports in college, but then I received a call from the golf coach at Cumberland asking me to take a look at CU because they were wanting to start a women’s golf team and looking for players. I went and toured it and was immediately drawn to Cumberland’s charm. I liked the small, but beautiful campus and was very impressed with the golf staff. I also really liked Lebanon and the location. I was so excited to have the opportunity to continue playing a sport I loved while receiving a quality education,” Dr. McGinley said.

In 2010, McGinley finished in third place in the TranSouth Conference Championship shooting a two-round 168 and placed second in the Union Spring Invitational placing behind her teammate Allyson Agee. Her strong play that year earned her TranSouth Freshman of the Year in 2010 while also getting All-Conference accolades.

Her sophomore year, she continued her strong play with five top-10 finishes in tournaments including a third-place finish at the Cumberland Spring Invitational.

In 2012, McGinley helped the squad to the women’s golf program’s first conference championship-winning the TranSouth Conference Tournament and then helped pave the way for the transition to the Mid-South Conference.

“Golf as well as my teammates allowed me to discover the true meaning of dedication and being a part of the team.  I consider the friendships I gained, especially with my roommates, during my time at Cumberland to be invaluable,” McGinley said.

“The science faculty at CU did an incredible job of preparing me with the fundamentals of knowledge as well as the tools to continue developing that knowledge during medical school.”

“I had an excellent advisor, who helped prepare me for the next steps in my life. Those of us pursuing biology degrees were a tight-knit group given that we had so many classes together, and I am grateful to have been a part of such an encouraging learning environment.”

She now works as a physician at UT Family Medicine Center in Jackson and at Jackson Madison County General Hospital and serves as one of the chief residents for the 2020-2021 academic year.

Cumberland University has helped prepare Dr. McGinley for the pandemic that has swept across the world.

Although, the coronavirus has not significantly impacted her area in Jackson, Tennessee they have had to change the way they operate on a day to day basis.

“We have been very fortunate in Jackson so far not to see a huge influx of the virus, and I am incredibly thankful for that. However, one of our residency clinics was designated as a testing site for the virus,” Dr. McGinley added. “Also, because we are a family medicine residency, we work with all kinds of patient populations on any given day such as nursing home patients, clinic patients including newborn babies, well-child checks, OB patients, preventative and chronic medical care, and geriatrics in addition to our hospital service which also consists of newborns, pediatrics, OBs, general medicine patients, ICU patients as well as spending time in the ER, so we have had to adjust our schedules trying to minimize exposures across patient populations.”

“We also have had to re-schedule a lot of our non-emergent chronic medical visits in the clinic, so I have missed seeing a lot of my patients that I have formed relationships with over the last year and a half.”

“It has been tough on families during this time when their loved ones are in the hospital because many of them cannot be there due to the visiting restrictions.” Dr. McGinley continued.

Dr. McGinley’s family keeps her going every day as well as her faith in God, “I am a huge family person so certainly my family is a tremendous motivator. My faith also motivates me. As I continue to pursue this career, I realize how blessed l am God has allowed me an opportunity to be involved in so many people’s lives during some of their most vulnerable moments.”

She has also created a new hobby for herself during this time of social distancing and Stay-at-Home orders, “I enjoy being able to enjoy the beautiful weather when possible as well as playing/singing music. I have created a YouTube channel during this time to record some videos.” Check out some of her videos she has made so far at https://www.youtube.com/channel/UCS0d8mSEYZKkOeufnQPFhNA.

This time of crisis does not only make things hard on a day to day, but a lot of good has come as many people realize the importance that our healthcare workers, grocery workers, farmers, etc. play in our lives.

“I think just the huge response of support during this time. People have come together in such an incredible way. For all of the negatives that this pandemic has brought, I think it has changed the way we live our busy lives and in some ways for the better.”

“We got a patient on our medicine service and I immediately recognized her name because I had known her since I was a child. She initially had some confusion coming in and was unable to communicate with her family. I was able to help take care of her in the hospital and eventually able to help her communicate with her mother, who had been incredibly worried about her. So that was certainly a rewarding experience.”

We are extremely thankful for the work that Dr. McGinley and all healthcare workers have put in during this time.