LEBANON, Tenn. – The Cumberland wrestling program announced the signings of Steven Sandefer and Joe Gallegos to scholarship papers for the 2012-13 academic year over the weekend. Sandefer and Gallegos become the fifth and sixth signees for the program for next season.

Sandefer is transferring from the University of Indianapolis where he was a 2012 NCAA Division II national qualifier at 149 pounds and a 2012 D-II Academic All-American.

The Mishawaka, Ind., native was a four-year letterwinner for coach Darrick Snyder at Mishawaka High School. He was a two-time Indiana High School Athletic Association state champion and ranked 12th nationally as a senior, compiling a 187-11 career record with 102 falls.

He also lettered three years in football and was a two-time USA Rugby National Team member. He is the son of Steve and Lisa Sandefer. 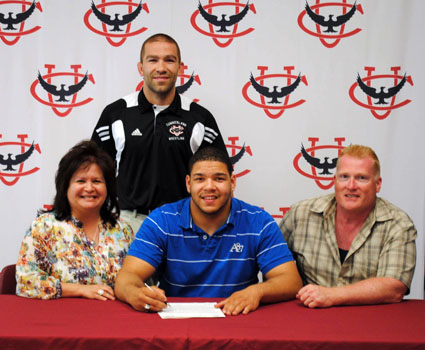 Gallegos was a four-year letterwinner for coach Al Hartman at Clay High School in South Bend, Ind. He was a three-time state qualifier and the 2012 state runner-up. The heavyweight registered a 142-31 career record at Clay with 101 pins, including a 45-3 mark as a senior with 34 pins.

He was a two-time All-Conference selection, the 2012 N.I.C. MVP and two-time regional champion as well as the 2012 semi-state champion. Gallegos earned 2011 AAU All-American honors and is the son of Joe Gallegos, Sr., and Cynthia Forrest.

Sandefer and Gallegos join Glenn Rockholt, Trenton Bell, Kevin Boston and Nick Paden in the signing class for next season.