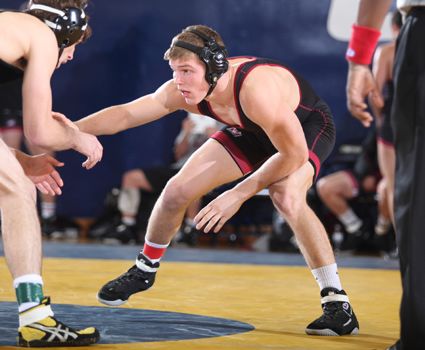 LEBANON, Tenn. – Cumberland wrestlers Jake Williams and Kirk Johnson each took first place in their respective weight classes, and four others placed in the top four to lead the Bulldogs as the hosts of the Cumberland Open on Saturday at the Dallas Floyd Recreation Center.

Williams skated through the first four bouts to the final match against Indiana’s Luke Blanton. It took the junior 7:38, but a pin ended the match and landed the Rio Rancho, N.M., native in first place.

Johnson faced a much tougher challenge in the opening round at 165, just edging Campbellsville’s Shelby Floyd in a 3-1 Decision. Johnson followed with a pair of victories by Fall leading to the championship bout. The Indianapolis, Ind., native defeated Lindsey Wilson’s Cadyn McKeeth by an 8-2 Decision to capture the win.

Justus Griffith recorded a pair of Decision victories at 125, before falling to Lindsey Wilson’s Gus Adams by Decision, 9-2. Griffith responded with three straight wins to advance to the third place match. Griffith faced off against Adams again, earning retribution with a 7-4 Decision.

Ethyn Holbrook also took third at 141 for the Bulldogs. After falling in a 6-4 Decision to Terry Stockton of the University of the Cumberland, Holbrook responded with a pair of victories by Fall at the 2:21 and 4:02 marks, respectively. The junior recorded back-to-back Decision victories in his final two bouts to take third.

Kyle Delaune and Corey Daniels each took fourth at 174 and 285, respectively. Deluane fell in the quarterfinals to Lindsey Wilson’s Erick Gomez, before recording a win by Fall at the 3:55 to advance to the third place match. The freshman was pinned two minutes and 14 seconds in by Hunter Gamble of Gardner-Webb to finish fourth.

Daniels earned one victory by Fall in the heavyweight class, before dropping a major decision to John Lopez of Central Baptist College. The freshman answered with a 5-0 Decision victory, a Fall at the 2:20 mark and a 4-3 Decision to earn a spot in the third place match. Daniels fell by Major Decision to Lopez in the bout.

Cumberland returns to action in a dual at the University of the Cumberlands on January 23. The Bulldogs will remain on the road for the completion of the 2013-14 schedule. CU and UC are set to begin at 6 p.m.