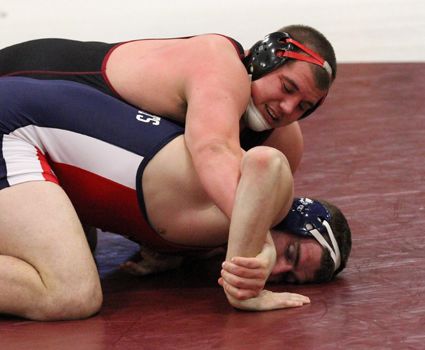 The Blue Raiders continued to win most of the close outings even after Hunt’s victory, with No. 1-ranked Jameel Bryant outlasting a hard-charging No. 3-rated Cody Linton at 184, 3-2, and Jahwon Akui recorded a 4-1 Decision against CU’s 12th-ranked Scott Stewart at 197.

Tyler Smith registered a 7-5 Decision for the Bulldogs in the heavyweight match versus Ameer Daniels, pulling CU within 15-6, but No. 6 Myron Bradbury defeated Justus Griffith, 6-0, at 125 and No. 15 Keaton Thomas collected a 6-2 Decision over Dalton Baysinger at 133, pushing the Blue Raiders advantage to 21-6 overall.

Cumberland heads to Newberry, S.C., this Saturday for the Newberry Open and will compete in the NAIA East Region Qualifier in Marietta, Ga., on February 22.