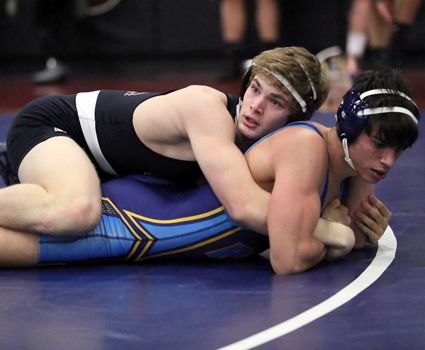 Croley won by Tech Fall, 16-0, at 4:18 against The Citadel’s Kenneth Braddock at 141 and posted a 5-2 Decision over Limestone College’s Ross Benzel before dropping a 6-2 Decision to eventual first-place winner Beau Bonahue from North Carolina State. In the wrestleback Croley recorded a 10-4 Decision against Limestone’s Terrence Dugay and received a Medical Forfeit versus UNC-Pembroke’s Javon Johnson before winning a 13-0 Major Decision over teammate Ethyn Holbrook. In the third-place match Croley registered a 9-2 Decision versus Newberry College’s Dyllan Greene.

Williams began the day with a Tech Fall, 24-4, at 6:50 over Coker’s Ed Stokes at 149 and then won a 22-9 Major Decision versus Ferrum College’s Paul Biggs before dropping a 16-7 Major Decision to North Carolina’s Joseph Moon. In the wrestleback Williams pinned N.C. State’s Hunter Hefner at 1:59 and won a 7-5 Decision over Limestone’s Melchisadac LaVergne in the third-place match.

Delaune led a group of five Cumberland grapplers at 174, pinning Matthew Ostermiller at 2:20 before dropping a 5-2 Decision to Appalachian State’s Nick Kee. In the backdraw he pinned Limestone’s Max Redfoot at 2:15 as well as Belmont-Abbey’s Patrick Argast at 1:03, but Delaune lost an 8-5 Decision to UNC-Pembroke’s Juan Stimpson in the third-place match.

Holbrook posted three straight victories at 141, beginning with a 4-2 Decision over Coker College’s RaSean McArthur and the same score against The Citadel’s John Ivashchenko before a 9-0 Major Decision versus Limestone’s Kendrich Portorreal. He was pinned by N.C. State’s Jake Donahue before losing to Croley in the backdraw.

Zeke Hunt recorded an 11-2 Major Decision over Duke’s Randy Roden at 174 before losing a 7-5 Decision to Stimpson. In the wrestleback he won a 7-5 Decision versus Florida Gulf Coast’s Giovanni Jiovenetta before Forfeiting to Delaune.

Tyler Smith won his opening match in the heavyweight class, a 4-2 Decision against Shorter University’s Chris Rowland, before dropping a 4-0 Decision to UNC-Pembroke’s Christian McLean. Smith pinned UNC-Pembroke’s Danny Berrier at 3:15 and won a 4-3 double overtime Decision versus Shorter’s Marlen Morgan before losing a 5-2 Decision to Limestone’s Devin Pommerenke in the semfinals.

Cumberland will take next weekend off before participating in the NAIA East Region Qualifier at Life University in Marietta, Ga.