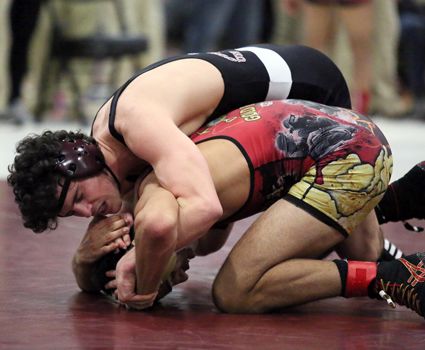 Williams and Hunt both swept through their brackets at 149 and 174, respectively, while Linton lost in the finals at 184 and Delaune won the wrestleback at 174.

Williams pinned West Virginia Tech’s Christopher Rapley at 1:07 in the Round of 16 and won a 17-10 Decision versus Steve Melara from the University of the Cumberlands in the quarterfinals. The Rio Rancho, N.M., native posted a 12-3 Major Decision posted a 12-3 Major Decision over Campbellsville University’s Sam Conners in the semifinals and outlasted Campbellsville’s fourth-ranked Kyle Terry, 10-8, in the first period of Sudden Victory in the finals. Williams improved to 23-2 in the calendar year.

Hunt drew a bye in the opening round before registering a 14-3 Major Decision over Brewton-Parker’s Heath McGregor in the quarterfinals. The Dacula, Ga., native posted a 7-3 Decision versus Lindsey Wilson’s Erick Gomez in the semifinals and recorded a 3-2 Decision against Indiana Tech’s 16th-ranked LJ Grayson in the finals.

Delaune won his first two matches, pinning West Virginia Tech’s Colton Rowe at 4:08 and collecting an 11-4 Decision over Campbellsville’s eighth-ranked Travis McIntosh before dropping a 6-5 Decision to No. 16 Grayson in the semifinals. The New Orleans, La., native pinned McGregor at 1:20 and then registered a 9-5 Decision versus McIntosh in the wrestleback finals.

Linton pinned St. Andrews University’s Russell Lindsay at 1:49 before winning an 8-1 Decision over Eddie Bernal from the University of the Cumberlands in the quarterfinals. The Winters, Calif., native posted a 3-2 Decision versus Life University’s fifth-ranked Trey Hicks in the semifinals, getting an escape in first tiebreaker overtime, before registering a 5-3 Decision to Lindsey Wilson’s top-ranked Jameel Bryant in the finals.

Senior Jacob Shirley reached the semifinals with a 10-6 Decision against Lindsey Wilson’s 10th-ranked Mitchell Judkins and a 16-6 Major Decision over Campbellsville’s 15th-ranked Marvin Lawrence at 165, but he lost to Indiana Tech’s seventh-ranked Kafuba Donzon and then dropped a 9-0 Major Decision to Jemson Villard from St. Andrews in the wrestleback.

Junior Scott Stewart followed a similar path at 197, winning an 11-3 Decision versus Truett-McConnell’s Dustin Branom and outlasting Campbellsville’s Fred Byars, 3-1, in Sudden Victory before losing a 6-4 Decision to Lindsey Wilson’s eighth-ranked Jahwon Akui. Branom then pinned Stewart at 5:00 in the wrestleback.

The complete list of national championship participants will be announced on Feb. 27.