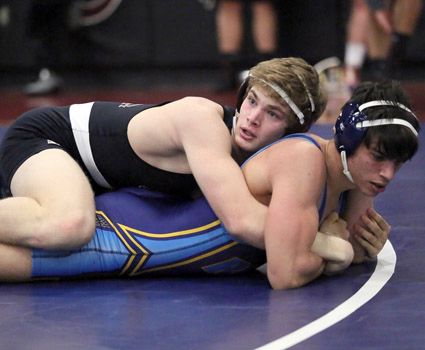 LEBANON, Tenn. – Kyle Delaune pinned Appalachian State’s Tyler Radford at 197 but otherwise it was a frustrating day for Cumberland, who lost to three Division I schools – Appalachian State, Buffalo and Gardner-Webb – on Saturday in Boone, N.C.

The Bulldogs were shutout by Buffalo, 51-0, with the Bulls posting six Falls and one Technical Fall as well as one Major Decision. Delaune dropped a 10-4 Decision to Joe Ariola at 197 and Corey Daniels also lost by Decision, 13-8, at heavyweight to Mike Silvis.

Delaune’s victory versus the host Mountaineers was the only points for Cumberland in the three matches. ASU registered six Falls and two Technical Falls while CU’s Robbie Resendiz dropped a 9-5 Decision at 133 to Jacob Grigg and Aric Fernandez lost a 4-0 Decision to Nick Vetell at 184.

Gardner-Webb recorded seven Falls, one Technical Fall and two Major Decisions in shutting out the Bulldogs, 55-0.

Cumberland participates in its first open tournament of the season this Saturday at the Patriot Open in Williamsburg, Ky.