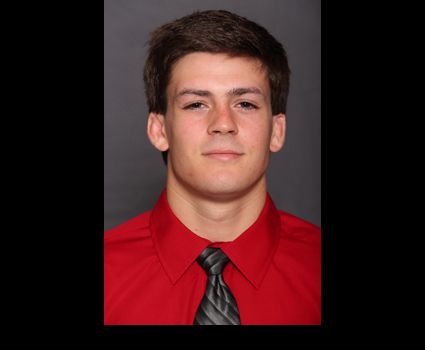 Freshman Austin Meyn won all three of his matches at the MTSU Duals.

LEBANON, Tenn. – Freshman Austin Meyn won all three of his matches and Michael Gonzalez, Dustin Harris and Kyle Delaune were all perfect in their matches, as Cumberland won three times at the MTSU Duals on Saturday in Smyrna, Tenn.

Meyn got CU on the board with an 8-3 Decision against Middle Tennessee’s Brandon Patton at 149 before Gonzalez won a 10-3 Decision versus Jordan Russell at 165. Harris pinned Daniel Devers at 4:35 at 174 and Delaune picked up a victory by Medical Forfeit. Scott Stewart posted the winning points with a 3-2 Decision over Rashied Rayford at 285.

Meyn collected a 9-1 Major Decision against Tennessee’s Dylan Cassidy and Harris won a 7-1 Decision over Zachary McMillan in two of the three contested matches against the Vols.

Against Huntingdon, Chris Mosher and Nick Paden each posted 8-3 Decisions, defeating Wade Thomas and Matt Gilson at 125 and 133, respectively. Meyn registered a 13-9 Decision versus Wes Smith and Dalton Baysinger recorded a 4-2 Decision at 157 against Mason Baldwin. Harris posted a 6-0 Decision over Deon Maxwell and Christian Varner won a 3-2 Decision versus Jesse Herron at 197 as well.