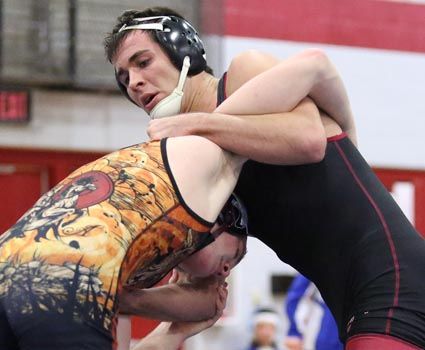 Stewart improved to 12-1 in the heavyweight division with five wins on Saturday. The Kenova, W.Va., native posted a 9-4 Decision over St. Catharine College’s Matthew Daugherty in the opening round, pinned Walker Lambert from the University of the Cumberlands in 33 seconds and recorded a 3-1 Decision against Missouri Valley’s Josh Smith.

In the semifinals the senior lost a 3-1 Decision to Missouri Valley’s Gabi Musallam, but Stewart rebounded with an 11-4 Decision versus Oklahoma’s Rex Shotts and then a 3-2 Decision over Missouri Valley’s Daniel Mueller in the third-place match.

Williams opened with two victories at 149, including a 20-5 Technical Fall against St. Catharine’s Cody Coomes and a pin at 6:39 over Benedictine College’s Sam Denning, but he lost a 14-8 Decision to Oklahoma’s Noah Teaney in the semifinals.

Ladigo Williams also did well at 149, pinning Missouri Valley’s Sterling Karr at 3:29 before dropping a 6-2 Decision to former Campbellsville wrestler Tyler Alsip. The redshirt freshman won three times in the wrestleback, pinning Lindenwood University’s Tony Arellano at 5:38, posting a 7-2 Decision against St. Catharine’s Daniel Reed and registering an 18-3 Tech Fall versus Benedictine’s Sam Denning, before Alsip pinned Williams at 4:25 one bout shy of the third-place match.

Dustin Harris started with two wins at 174, pinning Wentworth Military Academy’s Nolan Puletasi at 2:21 and posting a 10-2 Major Decision against Central Missouri’s Clayton Jeske beforer dropping a 2-1 Decision to Daniel Toth from the University of the Cumberlands in the semifinals. The Oakdale, Calif., native lost a 7-3 Decision in the wrestleback to Williams Baptist’s Conner Linehan and finished sixth overall.

Cumberland travels to Campbellsville University for a dual match on Tuesday before hosting the University of the Cumberlands on Saturday at 2 p.m. in the final home outing of the season for the Bulldogs.