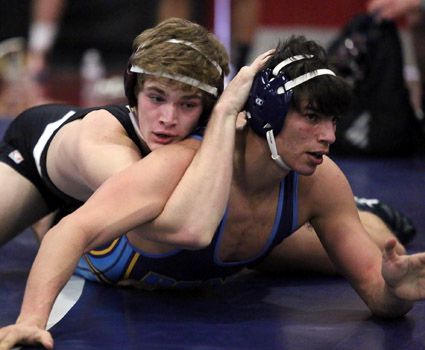 Kyle Deluane registered a 6-2 Decision at 184 in CU's 20-19 victory over the University of the Cumberlands. (Credit Steve Wampler)

LEBANON, Tenn. – Dustin Harris won by Fall and Kyle Delaune and Scott Stewart each picked up Decisions in the final four matches, with Stewart clinching a 20-19 Cumberland victory with a 5-2 Decision at 285 in wrestling action Saturday night at the Dallas Floyd Recreation Center.

The Bulldogs fell behind, 10-0, and trailed 16-8 after six bouts before mounting a comeback. Harris pinned Sean Bateman in 29 seconds at 174 and Delaune registered a 6-2 Decision over Brocky Leidecker at 184, giving CU a 17-16 edge.

The Patriots’ Devin Morris eeked out a 1-0 Decision versus Christian Varner at 197, but Stewart clinched the team victory in the heavyweight class.

CU’s Ethyn Holbrook won a 4-1 Decision at 141 to get the Bulldogs on the board and eighth-ranked Jake Williams racked up his 17th victory this semester with a 19-4 Technical Fall at 149 against Landon Burkhalter.

Thirteenth-ranked James Nolan started the match with a pin at 2:33 over CU’s Chris Mosher at 125 and 13th-ranked Grant Burkhalter followed with a 13-4 Major Decision for the Patriots versus Robbie Resendiz at 133.

Tristan Macri recorded an 8-2 Decision against Nate Croley at 157 and Scott Deluse won a 4-3 Decision over Peter Donchev at 165, giving the Cumberlands the 16-8 advantage before the final four bouts.

Cumberland Univ. 20, Univ. of the Cumberlands 19