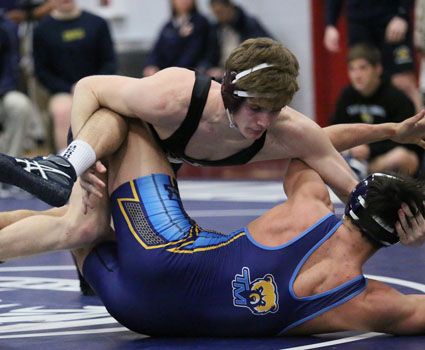 Kyle Delaune was one of six wrestlers to qualify for the NAIA Championships with their performances in Saturday's NAIA East Region Qualifier. (Credit Steve Wampler)

LEBANON, Tenn. – Senior Jake Williams won his weight class with ease and fellow senior Scott Stewart lost in the finals at the NAIA East Region Qualifier on Saturday in Fort Wayne, Ind. Austin Meyn, Nate Croley and Kyle Delaune all qualified automatically and Dustin Harris received a wild-card berth into the national tournament in two weeks as well with their performances in the event.

Williams was the top seed at 149 and after a bye in the Round of 16, the Rio Rancho, N.M., native registered a 20-5 Technical Fall (TF-1.5, 4:50) against St. Andrews University’s Brody McGrath. He won an 18-7 Major Decision over Life University’s 16th-ranked Dallas Brown and pinned Lindsey Wilson’s fifth-ranked Isaac Thomas at 4:10 in the finals, advancing to his fourth straight national championships, where he will look to defend his national title.

Stewart was also the top seed at 285 and received a Forfeit from Calumet College of St. Joseph before winning a 3-2 Decision over Lindsey Wilson’s Ameer Daniels and a 5-3 Decision versus Life’s 10th-ranked Jacob Roza in the semifinals. The Kenova, W.Va., native lost 4-3 in the second overtime to Lindsey Wilson’s seventh-ranked Chico Adams in the finals.

Meyn, a freshman, received a bye in the opening round at 141 and lost a 7-6 Decision to Lindsey Wilson’s sixth-ranked Daniel Leonard. The New Orleans, La., native posted a 7-4 Decision over teammate Ethyn Holbrook and won by the same score against Indiana Tech’s 15th-ranked Robert Humphrey before dropping a 3-2 Decision to Campbellsville University’s 10th-ranked Sam Conners in the third-place match.

Croley, a sophomore, started with an 11-6 Decision against Travis Wood from St. Andrews at 157 and posted a 10-2 Major Decision over Campbellsville’s Terry Harris before losing a 3-2 Decision to Lindsey Wilson’s fourth-ranked Joe Cozart in the semifinals. The Pigeon Forge, Tenn., native came back with a 4-1 Decision versus West Virginia Tech’s Conrad Lacey before losing a 4-2 Decision to Campbellsville’s second-ranked Tristan Macri in the third-place match.

Delaune, also a sophomore, received a bye in the Round of 16 and registered a 14-5 Decision against Life’s 15th-ranked Dalton Bailey before dropping a 13-3 Major Decision to Lindsey Wilson’s top-ranked Michael Pixley in the semifinals. The New Orleans native rebounded with a 2-1 Decision versus Brocky Leidecker from the University of the Cumberlands before losing an 8-2 Decision to Campbellsville’s 11th-ranked Chuck Sharon in the third-place match.

Sophomore Dustin Harris battled through the wrestleback to place fifth after losing his first bout at 174 by Fall at 6:03 to Lindsey Wilson’s seventh-ranked Erick Gomez. The Oakdale, Calif., native won a 4-3 Decision over Indiana Tech’s Antonio Rodriguez and pinned George Nathaniel from St. Andrews at 1:51. He lost a 3-2 Decision to Campbellsville’s Marvin Lawrence but won the fifth-place match against ninth-ranked Daniel Toth from the University of the Cumberlands.

Redshirt freshman Ladigo Williams nearly automatically qualified at 149 as well after dropping his first match, a 7-2 Decision to Lindsey Wilson’s Thomas. He pinned St. Andrews’ McGrath at 1:06 and collected a 3-2 Decision against Indiana Tech’s Thomas Garty. He lost 5-0 to Campbellsville’s ninth-ranked Kyle Terry and then by Fall at 4:11 to Life’s Rowdy Prior in the fifth-place match.

Redshirt junior Michael Gonzalez and junior Peter Donchev both started with victories at 165 before running into trouble in the quarterfinals.

Gonzalez received a bye and posted a 9-2 Decision against West Virginia Tech’s Bradley Ponchak before dropping a 7-3 Decision to 13th-ranked Isaac King from St. Andrews. In the wrestleback the Hesperia, Calif., native was injured at 2:19 against Brewton-Parker’s Orlando Medina.

Donchev also got a bye and won a 6-2 Decision over Truett-McConnell’s David Capers before Campbellsville’s LJ Henderson won by Fall at 1:06 in the quarterfinals. The San Diego, Calif., native posted an 8-4 Decision against Steven Traylor from the University of the Cumberlands before losing an 8-5 Decision to UC’s Scott Deluse.

The 58th Annual NAIA Championships are set for March 6-7 in Topeka, Kan.