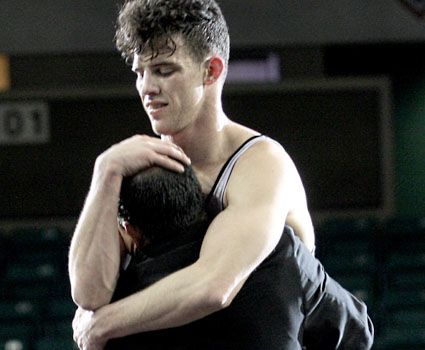 LEBANON, Tenn. – Cumberland finished ninth among 43 schools and three Bulldog wrestlers – Jake Williams, Scott Stewart and Kyle Delaune – were named NAIA All-Americans at the conclusion of the national championships, as announced Monday by the national office.

The Bulldogs finished with 55.5 points for ninth place, just 5.5 behind Campbellsville University, which was sixth in the overall standings.

Williams repeated as national champion at 149 thanks to a takedown and a near fall in overtime against Missouri Valley College’s Jake Ekster. The Rio Rancho, N.M., native finished his career as a four-time All-American, the last three of those at Cumberland. He is just the second three-time All-American in program history, joining Corey Bleaken (2007, 2009, 2011) with that distinction.

Stewart lost in the national title match at 285, 3-2, to Missouri Valley’s Gabi Musallam. The Kenova, W.Va., native earned his first All-America accolade during his final season, winning three one-point Decisions (one on a tiebreaker) before the finals.

Delaune placed fourth at 184, dropping his first match before reeling off five straight victories, including a pair of pins on the final day before losing in the third-place match. The sophomore avenged his first match loss with a pin of Oklahoma City’s Derek Sivertsen at 1:36 to reach the third-place match. It was also the first All-America honor for the New Orleans, La., native and his second appearance in the national tournament.