Phoenix split tri-match at the Cumberlands 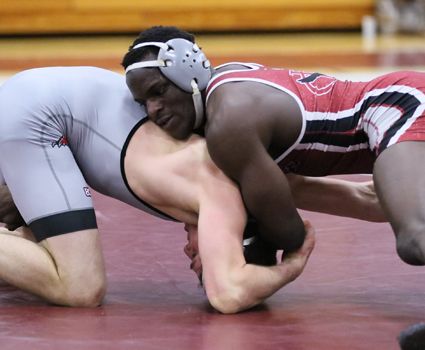 LEBANON, Tenn. – Ninth-ranked Lindsey Wilson won the last four bouts for a 24-10 victory but Cumberland rebounded with a 34-5 win over the University of the Cumberlands in a wrestling tri-match Wednesday night in Williamsburg, Ky.

The Phoenix (8-8) fell behind early to Lindsey Wilson, 10-0, only to rebound with three straight victories, including Decisions by Brandon Weber and Nate Croley and a Major Decision from Orlando Nawade, knotting the match at 10. The Blue Raiders posted three Decisions and a Technical Fall in the final four outings to take the team victory, with three of the four wins coming from ranked opponents.

Cumberland completely dominated the second match of the evening for CU, with Kyle Delaune pinning Lucas Moore at 1:43, Sean Nguyen and Evan Cole recording Major Decisions and Ricky Ratcliff registering a Tech Fall. The Phoenix won the first eight bouts in the match en route to a 31-0 advantage.

Nguyen dropped an 8-5 Decision to LWC’s 14th-ranked James Flint at 125, while Sammy Rosario lost a 7-2 Decision to Brady Moser at 133 and Austin Meyn dropped a 10-2 Major Decision to seventh-ranked Daniel Leonard at 141 to start the match against the Blue Raiders.

Weber got Cumberland back on track with a 10-5 Decision against Logan Hatfield at 149 before Croley’s 10-4 Decision versus Bryce Hoffman at 157 and Nawade’s 14-6 Major Decision over Freer Mace at 165.

Thirteenth-ranked Matt Walker defeated No. 16 Delaune with a 9-4 Decision at 174 for the Blue Raiders before Rhodes Bell won a 4-2 Decision over No. 14 Matt Carroll at 184. Jake Maupin, also ranked 13th for LWC, posted an 18-0 Tech Fall against Clifford Terrell at 197, and fifth-ranked Chico Adams outlasted No. 10 Tyler Smith with a 3-1 Decision at 285.

Ricky Ratcliff recorded an 18-3 Major Decision versus Michael Krzyston at 157 and Peter Donchev posted an 8-6 Decision against Steven Traylor at 165.

Delaune pinned Moore at 174 before Carroll’s 6-2 Decision over Eddie Bernal at 184 for a 31-0 Cumberland lead in the match. UC’s only win came at 197, with Ramsey Bloy registering a 26-11 Tech Fall against Terrell, and Smith capped the win with a 5-1 Decision over Quandre Chisolm at 285.

Cumberland hosts seventh-ranked Life University this Saturday at 2 p.m. at the Dallas Floyd Recreation Center in the club’s final home match of the season.

Cumberland Univ. 34, Univ. of the Cumberlands 5