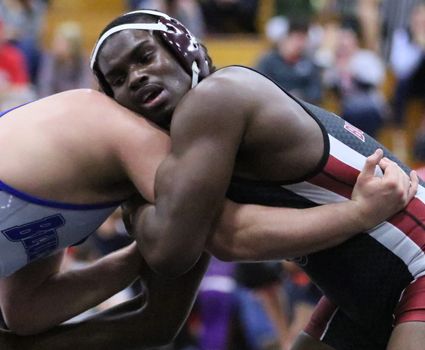 Cumberland trailed 15-5 at one point in the dual but posted four wins in the last five bouts, starting with an 8-5 Decision by 10th-ranked Orlando Nawade over Shelby Floyd at 165.

Fourteenth-ranked Delaune then pinned Mitch Rusch at 4:19 at 174 to close the gap to 15-14, but the Patriots pulled ahead by five with Zach Sullivan’s 18-6 Major Decision versus CU’s 15th-ranked Matt Carroll at 184.

Terrell kept the Phoenix in the match with a 4-3 Decision at 197 against Brennan Boykin and Turner finished off the victory with a 10-4 Decision over 10th-ranked Mario Bell at heavyweight. Sean Nguyen also posted a win for CU with an 18-3 Technical Fall (6:45) at 125 versus John Hernandez to start the dual.

Sammy Rosario dropped a 6-5 Decision to Cole Tawney at 133, while Brandon Weber lost a 16-1 Tech Fall to Anthony Ashford at 141. Keevi Matlock won a 9-0 Major Decision against Evan Cole at 149, while Andy Dobben pulled out an 8-6 Decision in Sudden Victory against Ricky Ratcliff at 157.

Cumberland next competes in the NAIA East Region Qualifier next Saturday in Marietta, Ga., with those results the determining factor in who receives automatic and wild card berths into the 59th Annual NAIA Championships set for March 4-5 in Topeka, Kan.