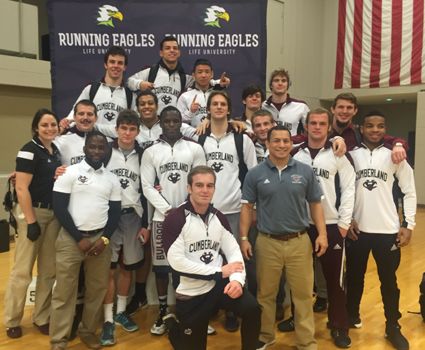 Cumberland tied for the team title with Campbellsville University with 142.5 total points, with Saturday’s NAIA East Region Qualifier serving as the Mid-South Conference Championships. Ten of the 11 teams participating are members of the league.

Rosario, a junior from Cartersville, Ga., pinned Brewton-Parker’s Omar Ruiz at 4:11 in his first bout at 133 and received an Injury Forfeit from Life University’s 13th-ranked Stephen Ireland to reach the finals. He lost a 3-2 Decision to Campbellsville’s second-ranked Davion Caston in the finals.

Croley received a bye in the first round at 157 and registered an 18-0 Tech Fall at 4:23 versus Mike Krzyston from the University of the Cumberlands. The junior from Pigeon Forge, Tenn., then won a 9-1 Major Decision over West Virginia Tech’s Conrad Lacey before losing by Fall at 6:17 to Brewton-Parker’s 15th-ranked Nathan Pristavec in the finals.

Nawade started his run at 165 with a 13-2 Major Decision over Brewton-Parker’s Wilder Elliott and posted an 11-3 Major Decision against Steven Traylor from the University of the Cumberlands to reach the semifinals. The junior from Lawrenceville, Ga., squeaked out a 3-2 Decision against St. Catharine College’s Shelby Floyd before dropping a 3-1 Decision in Sudden Victory to Campbellsville’s sixth-ranked Sean Black in the finals.

Donchev got a bye in the opening round at 165 and lost a 12-6 Decision to Black in his first bout, but the junior from San Diego, Calif., rebounded with a 15-0 Tech Fall at 6:01 against Elliott. He won a 9-0 Major Decision over Truett-McConnell’s Blaine Bird and pinned Floyd in 35 seconds to reach the third-place match. Donchev collected a 7-5 Decision over Life’s 11th-ranked Tyler Button to earn his automatic berth into the national tournament.

Delaune pinned Truett-McConnell’s Tyler O’Rear at 2:07 in his first match at 174 and won by Tech Fall, 18-0, at 6:27 over Denzel Leggett from St. Andrews to reach the semifinals. The junior from New Orleans, La., posted a 9-8 Decision against Campbellsville’s 10th-ranked Chuck Sharon before dropping an 11-3 Major Decision in the finals to Lindsey Wilson’s eighth-ranked Matt Walker.

Harris, who hadn’t wrestled in a month because of injury, pinned Life’s Matt Mannino at 2:42 and then won by Fall at 2:49 over Truett-McConnell’s Joey Cable in his first two bouts at 184. The redshirt sophomore from Oakdale, Calif., then pinned teammate Carroll at 5:57 before losing by Fall to Life’s fifth-ranked Jacob Dempsey at 4:53 in the finals.

Sophomore Sean Nguyen won his opening match at 125 over West Virginia Tech’s Denis Robles Gomez by Tech Fall, 22-3 at 5:59 but dropped a 7-4 Decision to Southeastern’s Olson Delisca in the semifinals. The Spring Hill, Fla., native posted an 8-3 Decision against St. Andrews University’s Brennan Patton and won by Tech Fall, 18-0, at 5:29 over Truett-McConnell’s Devonte Upshaw before losing a 6-5 Decision to Life’s eighth-ranked Devane Dodgens one bout shy of the third-place match. Nguyen lost an 11-7 Decision to Campbellsville’s Christian Clary in the battle for fourth place.

Sophomore Austin Meyn put forth one of his best efforts of the season, registering a 6-1 Decision over Dashon Eure from St. Andrews and an 8-5 Decision versus Campbellsville’s David Sparks at 141. In the semifinals he lost a 10-2 Major Decision to Lindsey Wilson’s seventh-ranked Daniel Leonard and then dropped an 8-2 Decision to Life’s fifth-ranked Garrett Webb. In the battle for fourth place the New Orleans, La., native collected a 9-1 Decision over Southeastern’s Aaron Wiechel.

Sophomore Evan Cole received a bye into the quarterfinals at 149 and dropped a 4-2 Decision to St. Catharine’s Garrett Carter. The Cartersville, Ga., native lost a 3-2 Decision to Life’s 10th-ranked Dallas Brown as well.

In the heavyweight division, junior Tommie Turner received a bye and won his opening bout, a 2-1 Decision versus Quandre Chisolm from the University of the Cumberlands before dropping a 2-1 Decision in Sudden Victory to Lindsey Wilson’s fifth-ranked Chico Adams. The junior from Dacula, Ga., then lost a 5-4 Decision to Devin Morrow from the University of the Cumberlands in the wrestleback.

Senior Tyler Smith also got a bye into the second round and won a 9-3 Decision against Lindsey Wilson’s Ameer Daniels before an 11-9 overtime loss to Life’s Tracy Jewett. The redshirt senior from Calhoun, Ga., posted a 7-4 Decision over Life’s Deandre Sims and pinned Chisolm at 4:52 before losing a 3-2 Decision to Adams.

The 59th Annual NAIA Championships are set for March 4-5 in Topeka, Kan.