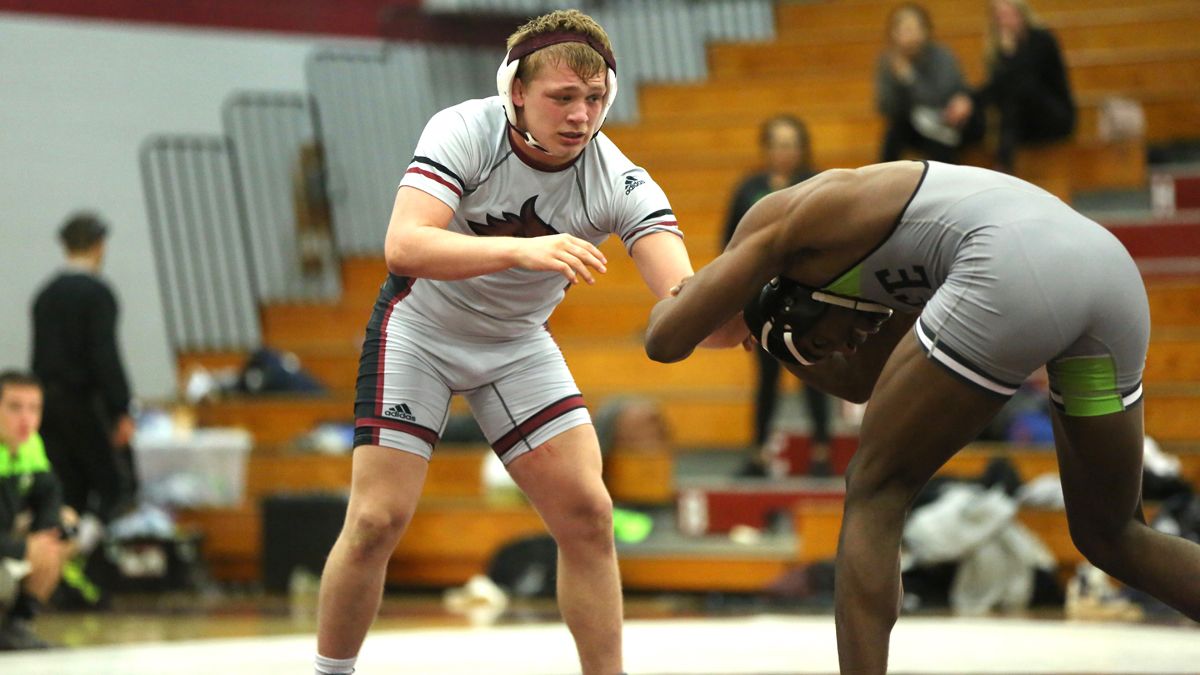 Freshman Zach Diviney won his bout in overtime on Saturday against Life during the Phoenix Duals. (Credit Maggie Calvert)

LEBANON, Tenn. – Josh Parrett posted a pair of wins and freshmen Shota Sisco and Zach Diviney while sophomores John Olivieri and Jon Floyd all registered victories, but Cumberland came up short in a pair of dual matches Saturday, dropping a 22-12 decision to No. 6 Life University and 20-16 to 12th-ranked Campbellsville University in wrestling action at the Dallas Floyd Recreation Center.

All three matches on Saturday (Campbellsville posted a 20-16 win over Life in the first match) started at 141. Life’s 12th-ranked Mason Calvert collected a 12-5 Decision over Cumberland’s No. 6 Austin Meyn to open the first match for the Phoenix and the Running Eagles jumped out to a 14-0 lead thanks to a 4-2 win by Dimitri Alicea over CU’s Evan Cole at 141 in the second period of Sudden Victory as well as Major Decisions at 157 and 165 (Denver Stonecheck vs. Sisco and Nosomo Pozo against Matthew Sells).

Diviney got Cumberland on the board at 174 with an overtime win against Keiondre Wedderburn, 7-5, and Olivieri followed with a 3-1 overtime victory at 184 versus Life’s seventh-ranked Hunter Smith. That was as close as the Phoenix would get, though, with Diallo Matsimela holding off eighth-ranked DeAndre Jones at 197 with a 3-2 Decision and Dalton Bailey defeating 15th-ranked Jon Floyd with a 6-1 Decision at 285.

Life’s Stephen Moreno added a 9-2 Decision versus CU freshman Dominic Robles at 125 before Parrett picked up a Medical Forfeit about halfway through his bout with Donovan Hough at 133.

Campbellsville collected two Decisions to start the match against the Phoenix, with Tombola Sindihebura edging Meyn at 141 to start, 11-9, in overtime before Michael Diemer registered a 5-3 Decision against Cole at 149.

Sisco picked up a 14-7 Decision at 157 versus Calieb Ray, just missing on a Major, but the Tigers reeled off three straight wins to take control of the dual.

LJ Henderson recorded a 9-0 Major Decision over Sells at 165, fourth-ranked Justin Brown tallied a 10-3 Decision against Diviney at 174 and second-ranked Chuck Sharon posted an 8-4 Decision versus Olivieri at 184.

Jones ended the streak with a 10-1 Major Decision for the Phoenix and Floyd won in the heavyweight match when Campbellsville’s Nate Jackson was called for an illegal move that caused an injury to Floyd and an Injury Default.

Campbellsville’s Michael Beets defeated Robles at 125 with an 18-8 Major Decision and Parrett ended the day with a 7-3 Decision over Kolton Radaz for CU.

Cumberland heads to Brewton-Parker this Friday for its final dual match of the year and the Mid-South Conference Championships take place February 17 in Bowling Green, Ky.

Unsportsmanlike on Life bench during 285 match, one team point deduction

Jackson defaults at 285 because illegal move causes injury to Floyd