Wrestling sets Program Record in Day One of the National Championships 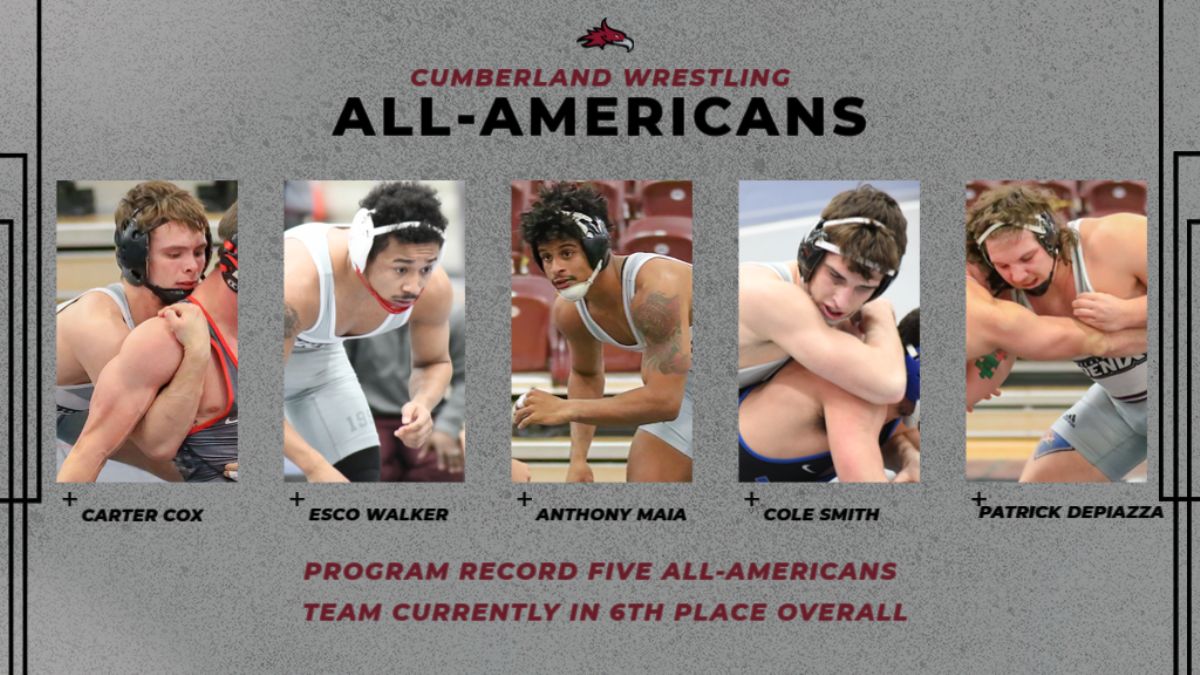 WICHITA, Kan.--Cumberland wrestling sets a program record with five All-Americans after day one. Esco Walker and Patrick Depiazza are still in the championship round and are two wins away from a national title. Carter Cox, Anthony Maia, and Cole Smith garnered All-American status and will place in tomorrow's matches.

As a team, Cumberland sits in sixth place with 38.0 points after day one. The Phoenix look to climb up the leaderboard for the first Top-5 finish in Cumberland wrestling history.

"It's such a privilege to coach these guys. It's great to see the hard work of the wrestlers and coaches pay off. We have a big day tomorrow and must finish strong," head coach James Hicks said.

Walker entered the tournament as the No. 5 seed in the 133 weight class and has run the table thus far with just two more matches to win before claiming a national title. Walker used a 9-2 decision to advance over the 12-seed Eli Watson from Providence and picked up a tight 6-4 decision over No. 4 Nick Kunz and will advance to take on Matt Gimson the 1-seed from Indiana Tech. Walker is an NAIA All-American with a chance to be a national champion.

Depiazza is in the same spot as Walker with just two wins away from a championship. He picked up two decisions on the day with a 6-0 decision over Nic Jarvis from Reinhardt and a tight 3-2 decision over No. 5 Maleek Caton from Williams Baptist. He now awaits Mid-South rival and No. 1 seed Brandon Reed from Lindsey Wilson. Reed and Depiazza have never matched up and are in for a good bout in Wichita. Depiazza is now a two-time NAIA All-American.

165-pounder Cole Smith saw his undefeated season slip away today as he picked up a win in round two of the championships with a 8-2 decision over Colby Johnson from Baker University. Smith was lined up to face No. 4 Sid Ohl from Life and lost for the first time this season losing a 10-4 decision. Smith has now moved to the consolation bracket and will face No. 2 seed Dalton Jensen from Grand View. The transfer earned All-American status.

Carter Cox also received a first-round bye and got a win over the 9-seed Billy Sullivan from Oklahoma City with a 7-1 decision and advances to face No. 1 seed Justin Portillo from Grand View. Cox lost by an 8-0 major decision and is set to face Gage Hudson from the Cumberlands in the consolation round. Cox is a first-time NAIA All-American.

Anthony Maia came in ranked No. 2 in the 149 weight class. Maia was upended in the first match by Andreus Bond from Southeastern sending him to the consolation round. Maia drew a tough opposition as the No. 1 ranked wrestler Trent Johnson from Lindsey Wilson dropped his first match pitting the No. 1 and 2 seed against each other much earlier than either anticipated.

Maia pinned the 1-seed in the third period advancing to face No. 8 Tristan Zamilpa from Doane and topped him with a 10-3 decision. He moved on to face Brock Rodriguez from Providence and picked up a win by injury and is now set to square off with No. 3 Trevor Anderson. He is now a two-time NAIA All American.

John Olivieri dropped his first match of the day in the 184 bracket sending him to the consolations. Olivieri clawed a win out over No. 11 Luke Jenness from Northwestern and picked up a 5-4 decision over Myles Starke from Life. He dropped his next match which would have made him an All-American in the tie-breaker rounds 3-2 to Baker Hadwan from Life going 2-2.

Keshawn Laws drew the No. 2 seed in the 141 weight class and lost by a major decision 9-1. He lost his first match in the consolations knocking him out of nationals. Matthew Sells went 0-2 as well in the 174 weight class losing a major decision to Luke Young from Bluefield and a 5-4 Ian James from Truett McConnell.

All five Phoenix still in the tournament will place and bring home some hardware. The action will begin in the morning.