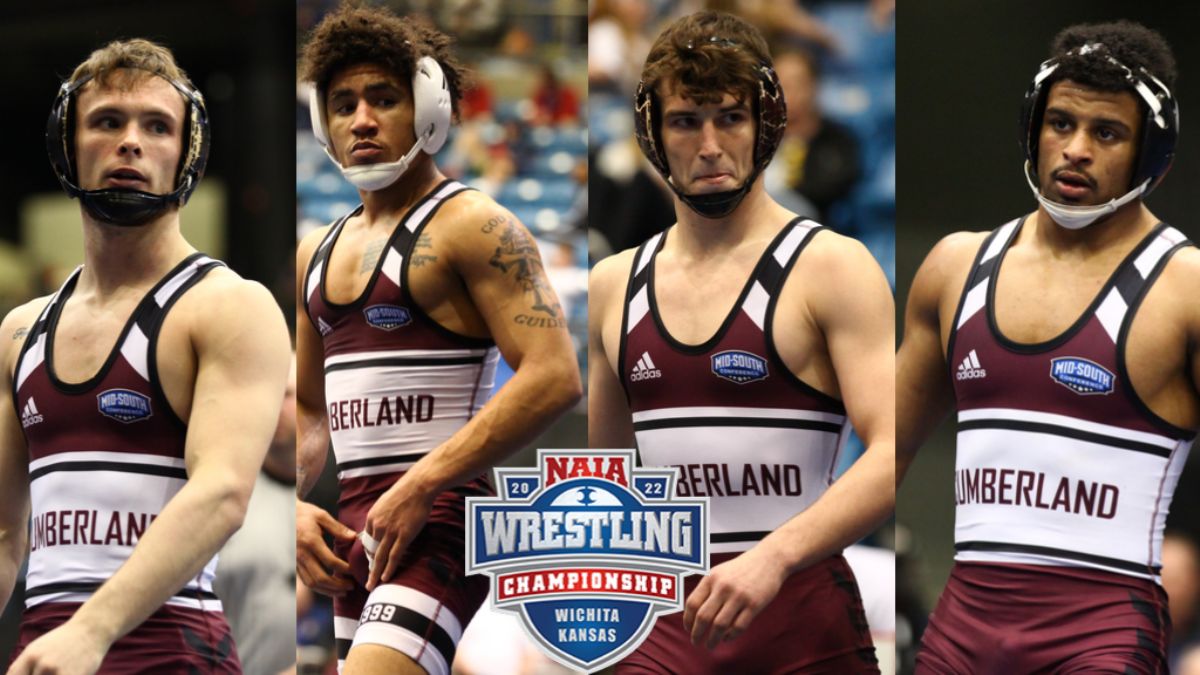 WICHITA, Kan.-- Cumberland Wrestling ends day one at the NAIA National Championship with four guaranteed All-Americans. Carter Cox, KeshawnLaws, Anthony Maia, and Cole Smith earned All-American status while Smith is also two wins away from a National Championship in the 165 weight class. As a team, The Phoenix are currently in eighth place overall with 38.5 team points with the opportunity to move farther up the standings tomorrow.

Carter Cox started the tournament with a big win in the 125 class over Cooper Mahaffey of Oklahoma City by pinfall in 5:24. The first-round win advanced him to the second round, where he took on 16th seeded Cagen Wallace from Lindsey Wilson. Cox found himself down early in the match but rallied back for a 6-4 decision win to advance to the Quarterfinals. Cox followed that up with a tightly contested 3-2 decision loss to No. 1 seeded Esco Walker, sending him to the consolation bracket. With status as an All-American on the line, Cox topped No. 11 Austin Franco by decision 3-2 to advance to the All-American Rounds. Cox is scheduled to take on No. 5 seeded Isaac Crowell of Southeastern tomorrow morning.

Keshawn Laws followed suit in his first match of the tournament and defeated RJ Marrero of Lincoln College in the 133 weight class. Laws won the match via major decision 14-4 and moved onto the second round, where he took on Joseph Lupton of Graceland. The senior dropped his second-round match to Lupton by decision 3-2 to move to the consolation bracket. Laws bounced back in his next match against Justin Coon and won via decision 7-2 to move on to the next round of the consolation bracket. The senior followed that performance up with a 1-0 decision victory over Jordan Martinez of Texas Wesleyan. Laws won his next match against Matt Gimson of Indiana Tech via medical forfeit to advance to the All-American rounds for the first time in his career. Laws is scheduled to take on Evan Potter of Southern Oregon tomorrow morning.

Anthony Maia received a bye in the first round of the 157 bracket and moved on to the second round to take on 11th seeded James Williams of Embry Riddle. Maia won the match against Williams by decision 10-6 to advance to the Quarterfinals. in the Quarterfinals, Maia fell to No. 3 Jack Bass of Life by pinfall, sending him to the consolation bracket. In his next match, he defeated No. 1 seed Nate Wheeler by pinfall in comeback fashion to solidify his status as an All-American for the third time in his career.

Cole Smith entered the 165 weight class as the No. 1 overall seed and proved why he was in his first two matches. Smith first took on Jayden Terronez of St. Ambrose and pinned him in 4:07 to move on to the second round. In the second round, Smith pinned Christian Richer of Central Baptist in 4:01 second to move on to the Quarterfinals, where he faced off against No. 9 seeded Keller Rock of Embry Riddle. Smith topped Rock by decision 7-4 after trailing early on in the match 4-2. The sophomore advances to the NAIA Semis for the first time in his career after finishing third in the tournament last season. Smith takes on No. 5 seeded David Rubio of Corban in the semifinals tomorrow morning.

River Henry started the day against Brahn Howard of Texas Wesleyan in a first-round matchup in the 197 weight class. Henry dropped the match by decision 5-1, moving him to the consolation bracket. The sophomore took on Deandre Rucker of Texas Wesleyan in the first round of the consolation bracket and fell via decision 5-1. The loss ends his season with a 14-13 overall record.

Patrick Depiazza started the day with a match against Nic Jarvis from Reinhardt in what was their second meeting this season. Depiazza moved onto the second round with a 6-2 decision victory over Jarvis in the 285 weight class. In the second round, Depiazza earned a thrilling 4-2 triple-overtime victory over No. 8 JJ Perez Life University moving him into the Quarterfinals. The senior then was matched up with the No. 1 seed Greg Hagan of Grand View and dropped the match by pinfall, moving him to the consolation bracket. Depiazza dropped his consolation match to No. 11 KC Buday and fell by decision 3-1, ending his season with a 21-6 overall record.

The action kicks off from Hartman Arena tomorrow at 10 a.m. with the Championship matches beginning at 7 p.m. on ESPN 3.