Langille was also voted Freshman of the Year and Gavin McKinney earned Co-Coach of the Year honors along with Lindsey Wilson’s Drew Burwash.

Langille leads the nation in seven different scoring categories, including points (78), goals (36), game-winning goals (8), goals per game (2.000), points per game (4.330), shots per game (8.170) and shots on goal per game (4.720). The Ardrossan, Alberta, native has scored at least three goals in a match on six occasions and posted multiple goals in a match 12 times in 18 matches. She netted 20 goals this season against Mid-South Conference opponents and was voted the NAIA National Player of the Week twice during the campaign.

Gilpin is tied for second on the club with 14 goals and ranks third with nine assists for 37 points. The St. John’s, Newfoundland, native has scored in nine matches this season and netted multiple goals on four occasions. She ranks third in the Mid-South in points, tied for fourth in goals and fifth in assists.

Nay leads the nation in assists with 17 and ranks second in assists per game (0.940) after handing out four helpers in this past Saturday’s victory against Shawnee State in the quarterfinals of the MSC Championships. The Sherwood Park, Alberta, native also has seven goals for the Bulldogs.

Kitson has posted a 15-2-0 mark in goal this season for CU, registering 11 shutouts and 44 saves in more than 1,500 total minutes. The Edmonton, Alberta, native has allowed just nine goals in 17 matches for a 0.530 goals-against-average, which ranks 10th nationally. 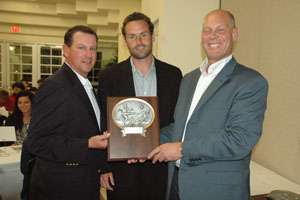 LaRose and Keele anchor the Bulldog defense as center backs for a group that has given up just 10 total goals in 18 matches. Opponents have taken just 133 shots and Cumberland has posted 11 shutouts. LaRose, a redshirt sophomore from Edmonton, Alberta, has two goals and Keele, a sophomore from Hendersonville, Tenn., has a pair of assists as well.

Parsons is tied for second on the club with 14 goals, including a career-best four scores in this past Saturday’s win versus Shawnee State. The Tavistock, England, native has netted 10 goals in the last eight matches and has added four assists during the year.

Quinn has recorded six goals and six assists from her midfield position this season, including two goals against Shawnee State and three assists versus the University of Rio Grande earlier this season.

Cumberland takes on Campbellsville University at 2:30 p.m. Central Time on Wednesday in the semifinals of the Mid-South Conference Championships.