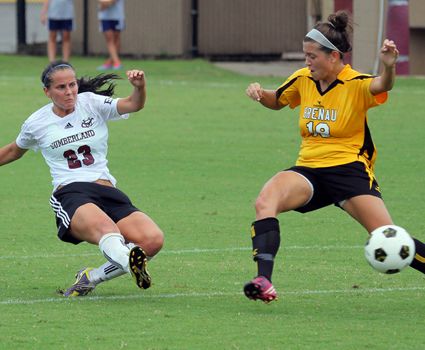 Rhianne Parsons (above) and Kristen Anstey were named the Mid-South Conference Offensive and Defensive Players of the Week. (Credit Steve Wampler)
Related Links

LEBANON, Tenn. – Cumberland’s Rhianne Parsons and Kristen Anstey were named the Mid-South Conference Offensive and Defensive Players of the Week, respectively, on Monday after helping the Bulldogs to a pair of wins in the club’s opening matches of the season.

Cumberland, ranked 13th nationally, posted a 4-2 victory at Tennessee Wesleyan to start the season and then defeated 22nd-ranked Brenau University, 1-0, at home on Sunday.

Parsons posted a goal and an assist against Tennessee Wesleyan, scoring unassisted in the 37th minute and adding an assist three minutes later for a 3-0 CU lead at the half. In Sunday's victory over Brenau, her shot from the top of the box in the 74th minute was the game-winner in a 1-0 triumph. The senior now has 32 career goals in 55 matches in her Cumberland career.

Anstey helped the Bulldogs win both matches during the week, including shutting down Brenau All-American Esther Anyanwu. The sophomore has moved into the central defense this season after playing on the outside in 2012. She limited the touches and kept Anyanwu (27 goals, 8 assists in 2012) in check in CU's 1-0 victory over Brenau, as Anyanwu did not have a shot in the contest.

Cumberland faces SCAD-Savannah at home this Friday at 3 p.m. and opens Mid-South Conference play on Tuesday, September 10 against Campbellsville University, also at home.