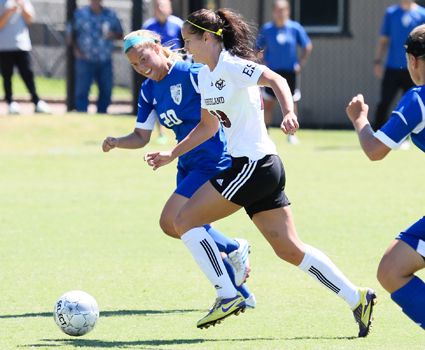 LEBANON, Tenn. – Rhianne Parsons scored twice and assisted on another goal, Olivia Chu, Shauna Gilpin and Taylor Nay each added a goal and an assist and Cumberland dominated from start-to-finish in a 6-1 victory over Shawnee State in women’s soccer action Tuesday in Portsmouth, Ohio.

The Bulldogs posted a 32-7 advantage in shots against the Bears (7-1-0, 1-1-0 Mid-South) and scored early and often, with Parsons giving CU an early edge with a goal in the seventh minute on an assist from Nay. Chu and Parsons added scores just 25 seconds apart midway through the period (on assists from Parsons and Gilpin) and Nay converted a penalty kick late in the half for a 4-0 advantage at the break.

Gilpin found the back of the net on an assist from Chu in the 54th minute and after Shawnee State scored on a PK, Savannah Keele netted Cumberland’s final goal on an assist from Kaitlin Phillips in the final minute of play.

SSU keeper Emily Kuehn made 17 saves for the Bears, including 11 in the second half. CU’s Lindsay Kitson had four saves.