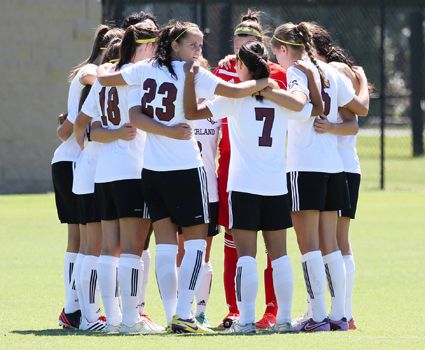 LEBANON, Tenn. – Cumberland moved up one spot for the second straight week and stands 11th in this week’s NAIA Women’s Soccer Coaches’ Top 25 Poll, announced Tuesday by the national office.

The Bulldogs (9-1-1) host No. 1-ranked Lindsey Wilson on Wednesday at 1 p.m. at Lindsey Donnell Stadium-Kirk Field, the second straight outing against a Top 10-ranked opponent. CU played to a scoreless draw this past Friday at ninth-ranked Martin Methodist, missing a pair of scoring chances in the first half but out-shooting the RedHawks, 11-7, in the double overtime contest.

Cumberland is 7-0-1 in its last eight matches, outscoring opponents, 29-3. The Bulldogs split a pair of meetings last season against Lindsey Wilson, dropping a 2-0 decision on the road in the regular season before winning 2-1 in the finals of the Mid-South Conference Championships, also in Columbia, Ky.

CU is 4-3-1 over the last two seasons against ranked opponents, splitting meetings with Martin Methodist in 2012 and defeating University of Science and Arts last season and Brenau University this year. The club’s losses have come against MMC, LWC and in the NAIA National Tournament versus Concordia [OR] University.

Cumberland has just one home game after Wednesday’s contest – October 26 against Bluefield College. Senior Day activities will take place between matches of the doubleheader that day.