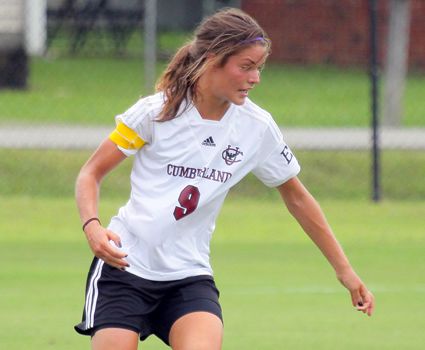 COLUMBIA, Ky. – Reneé LaRose scored on a header in the sixth minute and assisted on Taylor Nay’s scored in the 71st minute, as No. 7 Cumberland posted a 2-0 victory over St. Catharine College in the semifinals of the Mid-South Conference Championships here Thursday at Walter S. Reuling Stadium.

With the win the Bulldogs (15-2-1) advance to the conference tournament finals for the second straight season and will face the winner of Lindsey Wilson and Georgetown College at 5 p.m. on Friday here in Columbia.

LaRose headed in a corner kick from Nay in the early-going just seconds after Shauna Gilpin’s header drilled the crossbar and Kristen Anstey’s shot was saved by SCC keeper Lindsey Vinson, who kept the Patriots in the match with 12 saves, including several from point-blank range.

Cumberland peppered the goal for much of the match, outshooting St. Catharine, 25-1, in the match, including 15-0 in the second half. Rhianne Parsons nailed the crossbar and then hit the left post within three minutes in the second period and Vinson registered seven saves after the break.

The Bulldogs finally broke through with the second goal with exactly 19 minutes remaining in the match. LaRose played a beautiful 40-yard pass on the ground down the rightside to Nay, who waited as long as possible before firing far post past Vinson, putting the game away for CU

Cumberland’s Lindsay Kitson collected one save in the match and was barely challenged, as CU possessed the ball for nearly 95 percent of play.