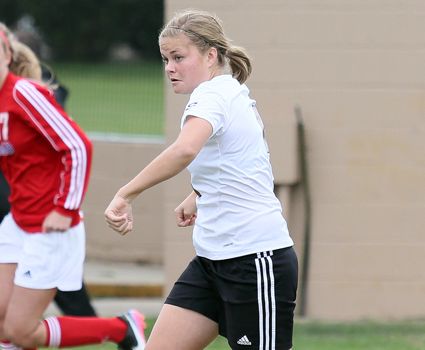 Mid-South Conference Player of the Year Taylor Nay gave the Bulldogs (15-3-1) a 1-0 advantage in the 66th minute, striking a free kick from 30 yards just inside the right post. It was her second goal in two matches and 13th of the season for the Sherwood Park, Alberta, native.

But an injury to Beth Morgan with 7:39 remaining in the match opened the door for the Blue Raiders (18-3-0), who attacked her substitute with a pass from Ayaki Shinada down the left side. Coyne slotted the ball far post past a diving Lindsay Kitson, knotting the match with just over five minutes to play.

Neither team scored in the final minutes but it took just 27 seconds for Lindsey Wilson to find the net again in extra time. Hurd just beat Kitson to Shinada’s ball near the top of the six-yard box, firing past the keeper for the game-winner. Hurd left the match midway through the second half after a bad fall in the middle of the pitch, but returned just minutes later to finish the match.

Cumberland and Lindsey Wilson will both find out whom they play and the Bulldogs where they play this coming Monday at 2 p.m. Central Time at NAIA.org. The Blue Raiders earned the conference’s automatic bid to the NAIA Championship Opening Round, which is set for Saturday, November 23.