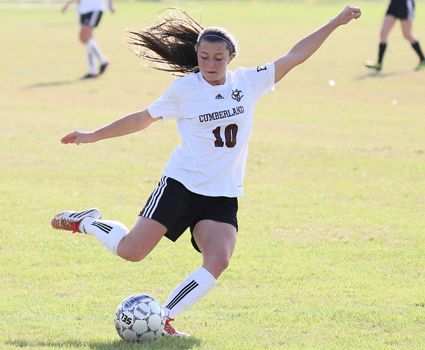 Kaitlin Phillips' goal in the 63rd minute prove to be the difference in Cumberland's 1-0 victory over Ottawa. (Credit Steve Wampler)
Ottawa Univ. at #9 Cumberland Univ. | November 23, 2013

LEBANON, Tenn. – Kaitlin Phillips found the back of the net in the 63rd minute as the Cumberland women’s soccer team outlasted Ottawa University, 1-0, in the opening round of the NAIA National Championships on Saturday at Lindsey Donnell Stadium-Kirk Field to advance to the final site in Orange Beach, Ala.

Cumberland’s (15-3-1) lone goal of the match came with just under 28 minutes to play in the contest. Shauna Gilpin found Phillips just inside the 18-foot box. Phillips did the rest, making a move to her right and finishing in the upper-90 to give the Bulldogs a 1-0 advantage.

The back line of Michelle Ward, Mackenzie Keele and Renee LaRose did the rest, keeping the Lady Braves from any strong chances for the rest of the contest. Goal keeper Lindsay Kitson added four saves in the game.

Cumberland was kept quiet for much of the first half, producing just two real goal chances in the frame. The first came on a shot from Shauna Gilpin, who broke free in a one-on-one matchup with the goalie. Gilpin received a nice touch pass from Taylor Nay, but was unable to make solid contact as Ottawa keeper Samantha Gitmed made the easy save.

Nay created a second opportunity around the 37-minute mark, putting a shot on target from just outside the six-foot box, which Gitmed deflected. The ball landed at the feet of Kaitlin Phillips who lobbed a shot which missed just to the left of the post.

The Bulldogs return to Orange Beach for the second-straight season after falling in the second round to Concordia [OR] University. CU will face off against Davenport [MI] University, which defeated St. Ambrose [IA], 4-2, in the opening round. The game will be played Tuesday, with a game time to be announced.