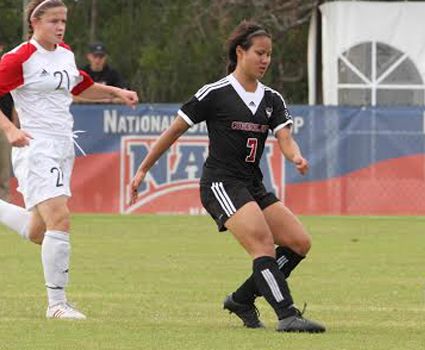 ORANGE BEACH, Ala. – Paige Eli’s one-timer from the top of the box found the back of the net in the 102nd minute and 11th-ranked Davenport University advanced to the quarterfinals of the NAIA National Championships with a 3-2 double overtime victory over Cumberland here Tuesday afternoon.

The Bulldogs’ (16-4-1) season ends for the second straight year in the Round of 16 here in Orange Beach, but this one stings a little more, as Cumberland held the lead for almost the entire match until Letesha Cannonier’s shot from close range hit the crossbar and bounced over the goal line with 2:41 remaining in regulation.

The Panthers (19-2-1) dominated play for the entire second half, putting CU keeper Lindsay Kitson and the entire Bulldog backline under duress. Davenport outshot Cumberland, 20-2, after halftime, but Kitson continued to turn away shots and make diving saves on crosses and corner kicks until the final minutes of regulation.

Cumberland failed to clear the ball at least twice in the final minutes and finally Thelma Gylfadottir found Cannonier near the six-yard box. She turned right and her shot just cleared the arm of Kitson, bouncing off the crossbar for the equalizer.

The Bulldogs were lucky to still have the lead at that point, though, as Shameeka Fishley nearly squared the match with about 12 minutes remaining, drilling a 20-yard shot that also hit the crossbar but bounced out.

Olivia Chu provided the offense for CU, scoring twice in the first half and nearly again in the first overtime. The freshman helped the Bulldogs strike early in the match, taking a pass near the top of the box from Rhianne Parsons, turning to her left and firing a left-footed shot just over the outstretched arms of DU keeper Michelle Marcus in the ninth minute for a 1-0 edge.

But the Panthers equalized quickly thanks to a miscommunication in the box by Cumberland. After a scramble in front, Michelle Ward and Reneé LaRose let a ball fall between them near the six-yard box and Lizzie Paul basically kneed it just under the crossbar in the 13th minute, knotting the match at one.

Chu answered for the Bulldogs though, this time off a give-and-go from Taylor Nay. Chu’s left-footed shot from a bad angle near the endline sailed over the head of Marcus, hit the back post and bounced into the net in the 25th minute for a 2-1 CU advantage.

Chu nearly had a third goal later in the period, stealing a pass some 50 yards from net and taking off with no defenders in front of her, but Marcus made a nice play, knocking the ball away from the streaking Chu just inside the box to keep the Bulldogs’ lead at one at the break.

Davenport was the aggressor from the opening whistle in the second half, with Cumberland constantly under pressure in the second half. The Bulldogs staved off the tying goal until Cannonier’s shot. The Panthers nearly ended the match in the opening minutes of the first overtime, with Paul and Cannonier missing chances before Cumberland finally gained composure and put some pressure on Davenport’s backline.

Chu’s left-footed shot from 10 yards was the club’s only chance, but CU held the ball in the offensive end for almost the entire five-plus minutes to end the first extra period.

In the second overtime, Paul gained possession out wide and passed to Gylfadottir, who held the ball and turned to her left, finding a hard-charging wide-open near the top of the box. The shot made it through all sorts of traffic, as Kitson looked like she never saw it as it passed by her into the net, a hard-breaking end to Cumberland’s season.