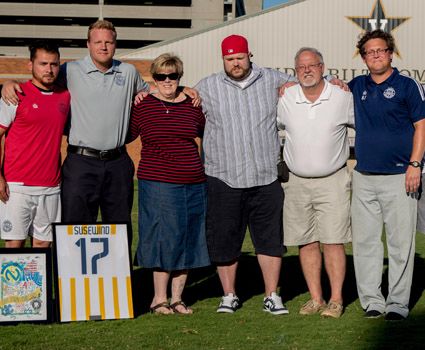 Nashville FC honored former CU assistant coach Eric Susewind with a team jersey given to his brother and parents during the club’s final home match on July 4. (Credit John Wilkinson)

LEBANON, Tenn. – Nashville FC honored former Cumberland University women’s soccer assistant coach Eric Susewind with a team jersey given to his brother and parents and also hung in the team’s bench area during the club’s final home match on July 4.

Nashville FC assistant coach Kyle Roelke and Susewind were best friends while players and coaches at Belmont University and several of his former teammates are members of the club as well. The framed jersey was presented to Susewind’s brother and parents during a halftime ceremony on July 4 before a crowd over 2,000 people at the Vanderbilt Soccer Complex in Nashville.

Nashville FC completed the regular season on July 4 with a 1-0 victory over the Knoxville Force, as current Cumberland soccer player Elliott Goodwin scored the only goal in the 21st minute.