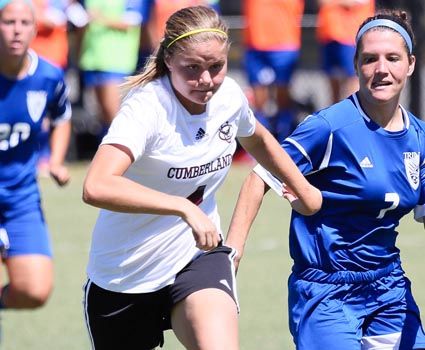 LEBANON, Tenn. – Junior Taylor Nay scored twice in the first four minutes of the second half and freshman Emily Shires assisted on a pair of goals, as eighth-ranked Cumberland overcame a slugging start for a 3-1 season-opening victory over Tennessee Wesleyan on Wednesday at Lindsey Donnell Stadium-Kirk Field.

The Bulldogs (1-0-0) hit the road for their next six outings, three against ranked opponents. CU held possession for almost the entire first half but was unable to penetrate the packed-in TWC defense.

Nay changed that in the second minute of the second half, with her shot from the top of the box knocking off the hands of a diving Cierra Nopen and then off the post before banging against the head of Nopen as well. After a delay for the injured keeper, Shires played a beautiful ball in front the right side to the back post for a header by Nay, knotting the match in the 48th minute.

Just over a minute later, Shires was tackled in the box, earning a penalty kick, which Nay converted low and left for a 2-1 edge.

The Bulldogs struck again in the 58th minute, this time with a shot from Shires deflected right to Shauna Gilpin, who converted low and right for her 34th career goal and a 3-1 Cumberland advantage.

Shires nearly scored in the first 20 seconds of the match, but her shot went right to Nopen.

Nopen made a nice save on a give-and-go from Gilpin to Sammy Groves near the top of the box and made a diving grab of Nay’s arching shot from just outside the box late in the period. The Bulldogs outshot the visitors, 10-1, in the first half, but many were from distance.

Wesleyan got on the board in the 12th minute on a mistake by the CU backline, with Reneé LaRose leaving a slow-rolling ball at the top of the box for keeper Lindsay Kitson, whose clearing ball hit TWC’s Amy Panayi. The ball bounced toward the Cumberland net and Panayi booted a left-footer into an empty net for the 1-0 edge.

Cumberland plays ninth-ranked William Carey in Mobile, Ala., on September 5 and takes on host University of Mobile the following day in its next action.