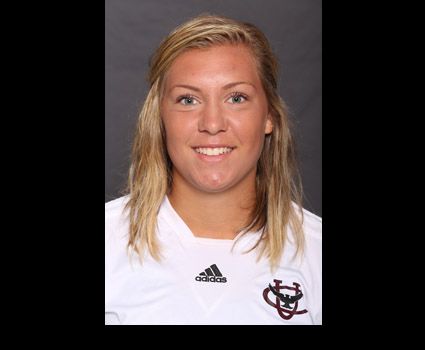 LEBANON, Tenn. – Emily Shires netted the equalizer in the 47th minute and eighth-ranked Cumberland missed a few good scoring chances later in the second half, settling for a 1-1 draw against No. 9 William Carey in women’s soccer action Friday evening in Mobile, Ala.

The Bulldogs (1-0-1) play again Saturday night against the University of Mobile in the classic hosted by the Rams.

William Carey’s only score of the match came on an own goal in the 22nd minute, though the Crusaders held a 4-2 advantage in shots in the opening period. Cumberland played much better in the second half according to head coach Gavin McKinney and really had a chance to pick up a victory.

“We did not play real well in the first half but really picked it up in the second half and overtime and had some chances to win the match.”

Shires netted her goal on an assist from Olivia Chu less than two minutes after intermission, knotting the match at one. Both teams collected 10 shots in the second period and extra time.